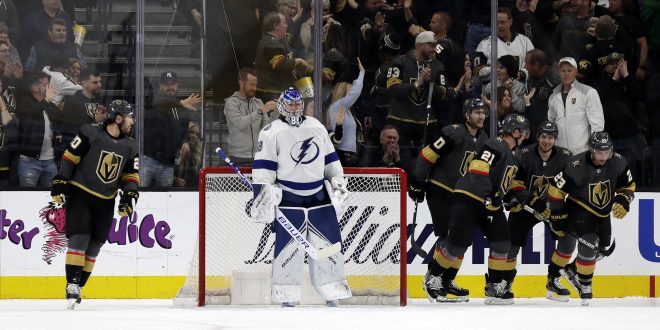 The Tampa Bay Lightning’s franchise record 11 game win streak was snapped last night against the Las Vegas Golden Knights by a score of 5-3. The Lightning remain second in their division and three points behind the Boston Bruins.

The game started in the Lightning’s favor. Kevin Shattenkirk took a shot from the right side of the ice that had some help getting into the back of the net. The puck was deflected off of Knights’ Nick Holden and snuck by keeper Marc-Andre Fleury. The Knights would not score a goal until less than two minutes remaining in the first period.

The Knights were able to stay in the game with great saves by Fleury throughout the period and the entire game for that matter. He finished the game with 24 saves.

Started to Pull Away

Las Vegas would score 2 goals in the second period to take a 3-2 lead into the third.

Knights’ Paul Stastny poked the puck inches away from the Tampa Bay keeper, seven minutes into the period. Steven Stamkos got one of two goals on the night on a power-play towards the end to tie it. Then, Mark Stone scored off a pass from Max Pacioretty in a two against one breakaway.

Despite the loss, Andrei Vasilevskiy had himself a solid game defending the net. In the second period, Vasilevskiy made great saves including one in which the puck traveled through a couple of players:

Shea Theodore fired the puck traveling under the arms and stick of two players finally to be caught. Vasilevskiy made 28 saves but it was the timing and kind of saves.

Las Vegas didn’t take long to increase their lead in the last period. Tampa Bay won the face-off to begin but was quickly taken away. Ryan Reaves cut off a pass from Tampa Bay’s Braydon Coburn and then battled his way to a goal.

It wouldn’t stop there. About 40 seconds later, Max Pacioretty scored on a power play to take a commanding 5-2 lead.

The Bolts would never recover, but Stamkos did bring it closer with one last goal in the final two minutes.

✌️ for the Captain! pic.twitter.com/fyl0tLaPD9

Not only was Tampa’s franchise record for consecutive wins broken, but so was Vasilevskiy’s 21 game point streak. It was also the Tampa keeper’s first regulation loss since a 5-2 loss to the Captials back in December.

No worries, the Lightning are still very likely to make the playoffs and have some easier games coming up. The next game is on the road against the Arizona Coyotes standing at 68 points and the last time they play Tampa Bay won handily 4-0. From there they have five home games in a row.

Previous Aggies, Bulldogs Meet in Must-Win Game for NCAA Tournament Bid
Next Orlando Magic Ready for Second Half of Season