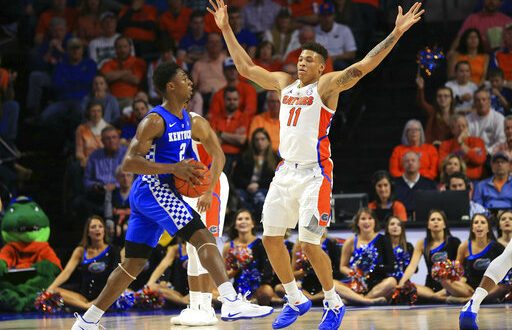 The Gator men’s basketball team looks to avenge their January loss to the LSU Tigers on Wednesday at home.

Last month, the Gators fell to the Tigers after Keyontae Johnson made a layup as time expired. The officials ruled that Johnson was still touching the ball as time expired, and Florida lost 84-82.

Overall, Gator head coach Mike White is 5-3 against LSU and 2-1 against them at home. Florida trails the all-time series against the Tigers 48-65.  This is the Gators’ second to last home game of the season; their last home game is on March 7 against Kentucky. According to White, these games are becoming more and more consequential, and his team sees the bigger picture.

Florida’s leading scorer this season, by a small margin, is Keyontae Johnson. Johnson averages 13.9 points and seven rebounds per game. Of Florida’s 27 total games this season, Johnson has only failed to score in double-digits seven times.

Against LSU in January, Johnson posted a stat line of 16 points and nine rebounds. In the month of February, he has averaged 16.4 points per game and has led the way for the Gators to win five of their last seven contests.

Coach White has identified that Johnson is hot right now. According to him, the sophomore forward is gaining confidence due to a larger team focus on ball movement.

White also said that Johnson has become an example for the rest of the team to follow. According to him, Johnson’s trajectory in terms of development is a model that White wants his young guys to follow.

Something that Gator fans have anxiously anticipated is the coming-out party of Kerry Blackshear Jr. The senior graduate transfer from Virginia Tech has struggled to stay on the court in the past few games due to foul trouble. According to White, when Blackshear is on the court his team is completely different.

Blackshear Jr. is second for the Gators in scoring and first in rebounds per game. Against Arkansas, he tallied four fouls in record time to limit him to only a fraction of the minutes he usually plays.

A quick look at LSU

Leading the way for the Tigers is senior guard Skylar Mays. Mays averages 16.4 points per game; he also scored 18 points and tallied seven assists against the Gators in their January meeting.

LSU sits at 19-8 and second in the SEC behind Kentucky. The Tigers are on a bit of a cold streak. LSU is the loser of four of its last six after losing in dramatic fashion to Vanderbilt earlier this month 99-90 but they did win their last game at South Carolina. They will look to gain momentum as the SEC Tournament approaches shortly.

Tip-off of the Gators men’s basketball team’s game against LSU is at 9 pm at the Stephen C. O’Connell Center. Television coverage can be found on ESPN2.