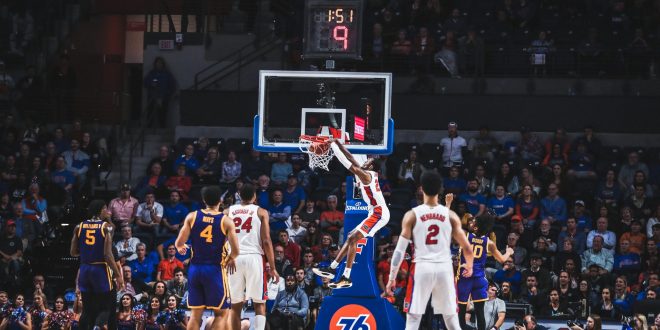 Scottie Lewis throws down the alley-oop against LSU on Feb. 26, 2020. Lewis scored a career-high 18 points against the Tigers. (Credit @GatorsMBK on Twitter)

The Florida Gators men’s basketball team stifled the LSU Tigers on Wednesday by a score of 81-66.

The Gators and Tigers are now tied at fourth in the SEC as both teams scrap for potential NCAA tournament bids.

Florida’s Keyontae Johnson earned his 7th double-double performance of the season with 25 points, 11 rebounds, and five assists. 25 points is a new career-high for Johnson, who has broken his career-high in two of his last three games. Shooting an efficient 11-15 on the night, he’s been on fire in February with four of his last six games having double-double performances.

According to Johnson, LSU played over-aggressively, which put him in an excellent position to score.

Scottie Lewis finished with 18 points, including multiple acrobatic alley-oop dunks that electrified the home crowd. While his head grazed the rim, fans stood and cheered as the freshman five-star phenom flexed his athleticism in spades. 18 points is a career-high for Lewis.

According to Lewis, his growing trust in the Florida coaching staff is responsible for his improved play as of late.

Coach White had nothing but praise for his freshman guard. According to him, Lewis has grown into his role as the season progresses.

Noah Locke made his first three-point basket in over 100 minutes of action with 3 minutes left in the game. His last 3-pointer prior to this one was in the first half against Arkansas on Feb. 18.

LSU’s leading scorer was Emmitt Williams with 25 points on 10-12 shooting. Of his 25 points, 17 of them came in the second half while the Tigers tried to mount a comeback.

Florida sprinted out to a 9-0 lead behind 4-4 shooting before LSU even scored a point. The Gators rode the energy of the crowd early. According to the Rowdy Reptiles twitter account, the student section of the Stephen C. O’Connell Center was completely sold out with about 3,000 students. This was despite poor weather in the Gainesville area.

Ball movement dominated the first half. Instead of players playing isolation basketball or “hero-ball”, often Gators passed up half-open shots for even more wide-open shots.

In the first half, the Gators dominated. Florida rode an absolute explosion offensively from Johnson. The Gators leading scorer surpassed his scoring average in only 16 minutes of play and poured in 17 first-half points. Johnson’s efficient 8-9 shooting carried over to the rest of the team, as Florida shot 56% from the floor through the first 20 minutes.

LSU started the game shooting 1-7 from the floor, and at one point trailed by 14 points. The Tigers picked it up as the half concluded, cutting the lead to just 10 at halftime. Trendon Wadford led LSU in scoring in the first half with 9 points on 4-6 shooting.

The second half started with a bang. Right out of the gate, Johnson pulled up and drained a three to push his scoring total to 20. The Gators went punch for punch with the Tigers early in the second, responding to makes with buckets of their own immediately after. LSU’s Williams tried and failed to bring the Tigers back with 17 points in the last 20 minutes.

Florida opened up their largest lead of the game with 11:30 left as they led by 18 points. LSU never held a lead in the entire game.

LSU, who ranks 3rd in the country in offensive efficiency, shot only 44% from the field and had only 9 assists. Florida held the line defensively to pick up a crucial win in the home-stretch of the season.

Coach White was proud of the win, but he is laser-focused on Tennessee on Feb. 29. According to him, the team has to get ready for a quick turn-around.

Steven Walker is a beat writer for ESPN Gainesville and is currently studying Journalism & Sports Media at the University of Florida.
@swalker_7
Previous Florida Women’s Basketball Team Home Finale Against the No. 1 Gamecocks
Next Magic Beat the Hawks on the Road