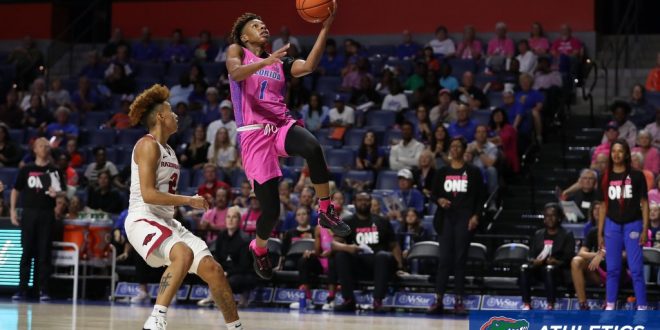 The Florida Women’s Basketball team is making its way back to the swamp for their final home game of the season. After an 83-80 victory against an AP Top-25 opponent, No. 22 Arkansas, the Gators are taking the hardwood with another top-25 team. They will be battling the top-ranked No. 1 South Carolina on Thursday. This was the team’s second Top 25 win for the season, the most it had in four years.

Junior guard Kiki Smith was on fire against the Razorbacks. She hit a career-high of 26 points and 10 field goals, even wrapping the game up with scoring the last eight points.  She also had a perfect 6 of 6 in free throws and a career-best with five steals.

Smith wasn’t the only one hitting the double digits. Freshman guard Lavender Briggs scored 20 points for her team, marking the third time this season she hit at least 20 points. Senior Foward Zada Williams was honored during a pre-game senior sendoff. She brought in her seventh double-double of the season, consisting of 12 points and 10 rebounds. Sophomore Reserve Emanuely de Oliveira also hit her career-best with 11 points, bringing home three 3 pointers.

The Gators started the game off strong and were in the lead as high as 14 points. They finished the first quarter with 10 points on the Razorbacks. However, the Razorbacks outscored Florida in the second, 24-21, and the fourth, 24-19, quarters.

This was the team’s second time this season facing the Razorbacks after their 57-79 defeat last month.

The Women’s Basketball team has made strides of improvement this season as compared to last. Last year they concluded the season with an 8-23 record. The Gators had an overall seven-win improvement.

Florida will be facing the No. 1 seed on Thursday. This is the first time the Gators are hosting a No. 1 team since 1998. South Carolina defeated No.14 Kentucky, which earned them the No. 1 ranking and an SEC title. They are being led into this matchup on a 21 game winning streak by head coach Dawn Staley, who hit her 300th win with their last matchup. In 2017, she aided the South Carolina Gamecocks with five SEC titles and a National Championship.

A couple of notable Gamecock players to look out for in this week’s matchup include first-year forward Aliyah Boston. She is topping the charts for her team with an average of 12.9 in scoring, 9.1 in rebounding, and 2.8 in blocking. Senior Tyasha Harris isn’t just making strides on the court for the Gamecocks, but also in the SEC. She hit the SEC best in assists with an average of 5.5 and 12 points.

The Gators and Gamecocks will be going head to head on Thursday at the Stephen C. O’Connell Center. Tipoff is at 6 p.m.