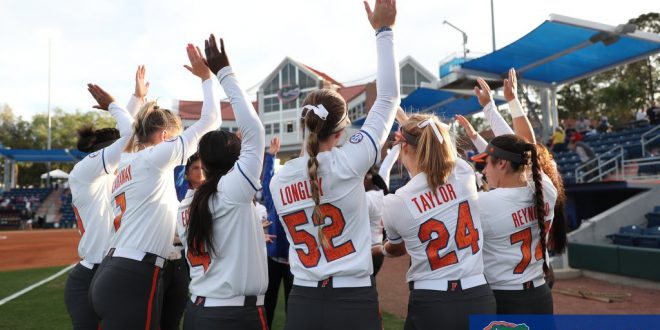 Crown Hannah Adams the queen of the dramatic in Gainesville. After 11 innings, Adams decided to finally end the marathon-of-a-contest between Florida and Auburn on the softball diamond. Adams’ RBI single with the bases loaded scored Cheyenne Lindsey and won the game for the Gators 2-1.

Hannah Adams with her third WALK-OFF hit of the season gives the Gators the 2-1 win and the series over Auburn!!#GoGators x #GatorsMarathon pic.twitter.com/dqUqEdBJdH

This single resulted in the third walk-off hit of the season for Adams and the Gators. Once again, Adams proved that she owns the clutch gene.

Florida clinched the series over Auburn after 11 excruciating innings with the victory. In terms of innings pitched, Saturday tied for the sixth-longest game in school history.

Considering that the game lasted 11 innings, it’s not surprising that neither team started slowly on offense. The first run came in the fourth inning. Brittany Maresette delivered with an RBI-single that plated Jadia Jones that put Auburn on the board first.

In the bottom of the sixth, Florida finally answered. With two strikes and two outs, Lindsey laced an RBI-single that brought in pinch-runner E.C. Taylor to tie the game.

Later, Lindsey came within feet of winning the game for the Gators. She led off the bottom of the ninth with a booming double, but was stranded. Florida left 14 runners on base, which hurt its offense immensely.

Natalie Lugo and Samantha Yarbrough each turned in gutsy performances for their squads in the circle. Yarbrough yielded one run despite nine hits over 10 innings and struck out eight. The Auburn starter threw a mind-boggling 174 pitches.

Lugo threw a whopping 147 pitches over 9.1 innings, with nine strikeouts and only four hits and one run allowed. Katie Chronister struck out three in 1.2 innings of relief for the Gators.

Florida (20-4) goes for the sweep of Auburn (14-10) on Sunday. It seems that someone anticipated the late Saturday game, as first pitch isn’t until 3 PM.