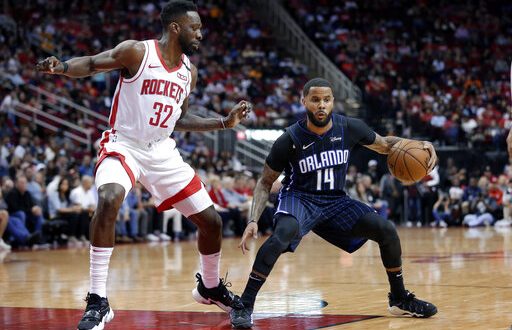 The Orlando Magic didn’t seem to struggle with the loss of their second-leading scorer, Evan Fournier, in their 126-106 victory over the Houston Rockets on Sunday night.

Orlando’s road victory over the struggling Houston Rockets proved the abilities of the Magic bench. In addition, it showed signs of an off-beat Houston team.

Orlando center Nikola Vucevic noted the absence of Fournier would require the Magic to find their next man up. The Orlando guard injured his right elbow on Wednesday against the Miami Heat.

Point guard D.J. Augustin made his case off the bench, leading the Magic with 24 points. In addition, Augustin added three assists and two rebounds for Orlando.

Furthermore, Augustin was four for six from the three-point line and seven for ten from the field.

Additionally, guards Michael Carter-Williams and Terrence Ross each tacked on another 16 points for the Magic off the bench.

DJ was feeling it in Houston. Who would you pick for Player of the Game? pic.twitter.com/hGRo6jYN45

The Magic quickly took control of the game in the first quarter. Orlando established a lead that the Rockets wouldn’t be able to overcome.

A one-foot shot from Orlando’s Mo Bamba extended the Magic lead to 34-22 at the end of the first quarter.

Vucevic ended the night with 16 points and 16 rebounds for Orlando.

Russell Westbrook and the Rockets were able to cut the Magic lead to fifteen points multiple times throughout the third quarter. However, the Magic easily reestablished their lead.

Westbrook led the Rockets with 24 points and eight rebounds.

The Magic momentum couldn’t be slowed in the fourth quarter.

Up Next for Orlando

The Magic return to the court on Tuesday against the Memphis Grizzlies. Tip-off is set for 8 p.m. in Memphis.