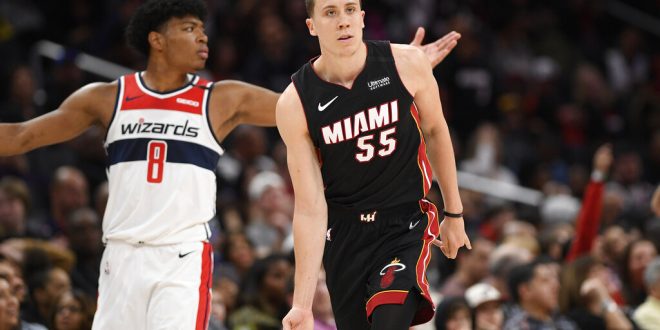 Miami Heat guard Duncan Robinson (55) gestures after he made a three-point basket during the second half of an NBA basketball game as Washington Wizards forward Rui Hachimura (8) gestures, Sunday, March 8, 2020, in Washington. The Heat won 100-89. (AP Photo/Nick Wass)

The Miami Heat went on the road on Sunday and defeated the Washington Wizards 100-89. With this win, Miami broke their road four-game losing streak.

The win helped Miami’s playoff positioning as they are fourth in the Eastern Conference.

The game was close as the Heat only led by three points entering halftime. After that, Washington was able to tie the game at 72 to end the third quarter. However, Miami was able to outscore the Wizards 28-17 in the fourth to get the win.

The Heat had to battle out this win without their top scorer, Jimmy Butler. He was in and out of the game due to a bothersome left toe.  Butler officially left the game late in the third after his game execution was limited by the injury.

In the few minutes that he played, he only scored nine points with zero assists and rebounds.

After Butler’s departure, Miami quickly found another star player to rely on. Power forward Bam Adebayo was able to step up for his team, getting 27 points and 14 rebounds.

Adebayo was an important factor in Miami’s win and Butler is not surprised that his team was able to get the win without him.

“I think we all have enough faith in each other, in this group of guys, to get it done, (even if) we’re a man or two down.” said Butler.

Duncan Robinson also played a part in their win, scoring 23 points. When the Heat was trailing 83-75, Robinson added a pair of treys to add to a Miami 25-3 run.

With this loss also came the loss of star player Bradley Beal’s streak of 21 games with 25+ points. He might’ve come up short to keep his streak but his 23 points were still crucial in Washington’s efforts.

In the second quarter Beal, the former Gator, was able to get three 3-pointers to cut Miami’s lead in half. He was an impressive 4 of 5 from behind the arc and 7 of 10 from the field in the first half.

But that hot shooting would stay in the first half, as the second half did not see any Beal action.

He scored a three-pointer early on the third, and that would become the last time he scored. Beal went 1 for 14 from the floor in the second half.

Shabazz Napier led his team in scoring with 27 points. Right next to him was Davis Bertans who chipped in 25 points that included a career-high eight three-pointers.

Washington’s offense relied heavily on the Beal, Napier and Bertans trio as they combined for 75 of the team’s 89 points.

Despite the Wizard’s record, Beal has had an amazing season so far. He is currently second in the NBA in scoring, averaging 30.4 points per game.

His execution this season has led him to earn the respect of many players in the league. One of these players is Miami’s own, Adebayo.

After the game, the two players met and exchanged some words before Adebayo was able to snag Beal’s jersey. Adebayo later put the jersey on backward for his interview.

Bam Adebayo wearing his signed Bradley Beal jersey during the post game interview. Said it was “out of respect” for Beal.#RepTheDistrict pic.twitter.com/vkpnn0M0pp

Beal was quick to react to the interview by sharing it in his twitter account with the quote: “A real one!!!”

Adebayo said that it feels great being recognized by someone like Beal.

“It’s great coming from a guy that’s been in the league as long as him, one of the top scorers in the league. It’s great to know you earned his respect and you just keep earning respect from guys like that.”

Next, Miami will return home and host the Charlotte Hornets on Wednesday, March 11th. Tip off for this game is set for 7:30 pm.

Camila is a senior at the University of Florida, who served as a beat writer for the women's basketball team from 2019 until the 2021 season. She was also a beat writer for the Gators football team during the 2020 season. Camila is also WUFT's news director as well as a sports reporter/anchor.
@CamilaMaffuz
Previous 16-0 and more to go for Gator Baseball
Next D.J. Augustin and Magic Bench Lead Orlando Over Houston