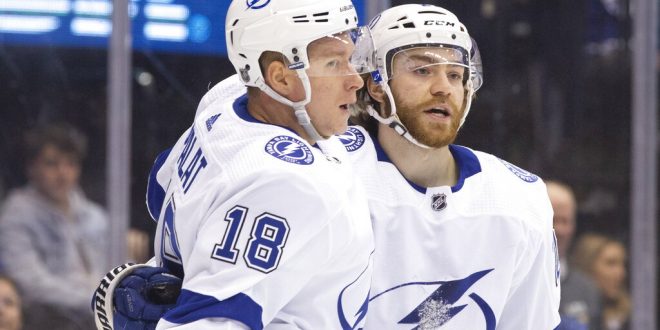 The Tampa Bay Lightning dropped 2-1 against the Toronto Maple Leafs. This is the second game in a month that the Lightning has lost to the Maple Leafs by one goal.

Despite it only being a one-goal game, Toronto dominated and claimed possession pretty much at every turn. The Maple Leafs had lost their last three games in California, combining for just three goals against the Western Conference’s three worst teams — the San Jose Sharks, Los Angeles Kings and Anaheim Ducks.

But something snapped back into place against the Lightning.

Auston Matthews scored his 47th goal of the season and Frederik Andersen made 32 saves. William Nylander also scored a goal for Toronto.

Ondrej Palat brought in the only goal for Tampa Bay, while Andrei Vasilevskiy made 34 stops.

Lightning head coach Jon Cooper put it best on the Lighting performance during the first period.

“That would fall in the embarrassing (category),” he said according to ESPN.

The Lightning started the game out-shot 0-11, holding absolutely none of the possession in the game. Tampa Bay’s first shot didn’t come until 11 minutes into the game. Just a little over a minute later, Barclay Goodrow was given a two-minute penalty for hooking.

Toronto took advantage of the situation and Nylander scored on a power play just six seconds later, assisted by John Tavares and Mitchell Marner. The Lightning ended the first period with just 15 shot attempts and six shots to the Maple Leafs’ 29 shot attempts and 18 shots.

The game stayed at 1-0 until only five minutes remained in the period. Nikita Kucherov shot the puck, but it was saved by Anderson. However, he could not rebound fast enough from the first shot and Palat to came in and scored for the Lightning.

So, despite a rough first period, the Lightning were going into the last period tied 1-1.

Both teams had good starts to the third period. However, Cedric Paquette was called for tripping and like the first period, Toronto took advantage. Less than four minutes into the period, Matthews scored the winning goal assisted by Mitchell Marner and Tavares.

Even though there are just 12 games left in the regular season, the Lightning is pretty secure with their second-place Atlantic Finish. Tampa Bay is seven wins ahead of the third-place team, the Maple Leafs. They are only one win behind Atlantic division leader, the Boston Bruins. However, the Bruins have seven fewer losses.

The Tampa Bay Lightning will return home tomorrow to take on the Philidelphia Flyers. The Flyers are second in the Metropolitan Division and two wins behind Tampa Bay in the overall Eastern Conference standings. Start time for tomorrow is set for 7 p.m.