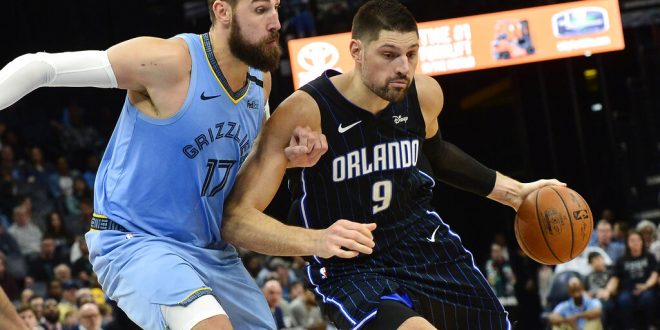 The Orlando Magic were down 17 points during the first half against the Memphis Grizzlies on Tuesday night. However, a second-half rally put them one game closer to locking up a playoff spot. The Magic ended the night with 120-115 win.

Magic get help from the bench

After several misfires early on, the Magic got rolling in the second half. A huge part of that was because of Terrance Ross. The 29-year-old guard came off the bench and provided a much needed spark. Ross was responsible for 24 points, 18 of those came in the fourth quarter. Ross led the team in points, and did it coming off the bench. Ross has been efficient off the bench all season by averaging 14.8 ppg.

If the Magic are going to hold on the last playoff spot, it would be wise to keep Ross involved early and often.

Nikola Vucevic recorded 19 points, 11 rebounds and 7 assists. The center shot 9/15 and hit one from beyond the arc.

Michael Carter-Williams had his best game of the season. The 28-year-old point guard put up 20 points and was perfect six for six from the line. He also went 2/3 from deep.

Holding onto the eighth seed

After Tuesday’s win, the Magic are one step closer to a playoff spot. Orlando is currently 30-35 on the season. While that record should not impress many, it is good enough to hold the final spot with a comfortable lead.

The next team behind the magic is Washington Wizards. Washington has 24-40 record, which puts them six games behind Orlando. The Magic have also defeated the Wizards all four times this season.

If the Magic are going to be in the playoffs, then they need to prove to themselves that they belong. If the Magic belong, they should have no issue defeating teams like the Bulls at this point in the season.

The real tests are at the end of the season when they play teams like the Cetltics, 76ers and Raptors. These three teams will be in the playoffs with high expectations. When the Magic play them late in the season, it should treated like a playoff game regardless if it is a must-win game or not.