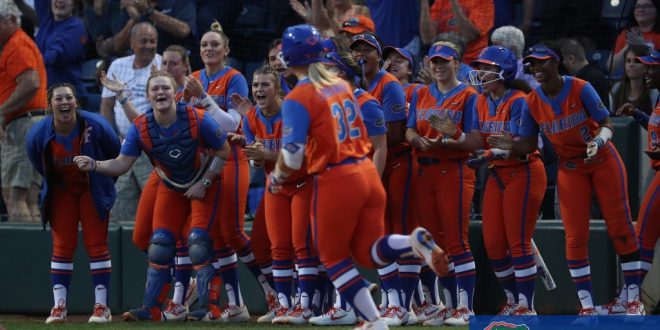 Kendyl Lindaman is cheered on by her Gator teammates as she rounds the bases after her go-ahead two-run homer against FSU. Photo Credit: @GatorsSB Twitter.

Two balls, two strikes and two outs with the score knotted at two. Deuces were wild for Kendyl Lindaman in the bottom of the fifth inning against Florida State on Wednesday night. Then, the Gator slugger slapped a ball to right-center that sank over the SEC Champions sign for a two-run homer. After the game, Florida head coach Tim Walton praised her approach at the plate.

Florida only tallied five hits against the Seminoles, but they came at opportune moments. Before Lindaman’s hit, Hannah Adams blooped one to shallow left and hustled for a double. Lindaman gave the Gators a 4-2 lead when she drove in Adams. The home run was Lindaman’s seventh of the season and second in the past two days.

In the sixth, Cheyenne Lindsey knocked a ball through the left side and extended the Florida lead to 5-2. Natalie Lugo pitched two dominant, shutout innings of relief to finish off the ‘Noles.

Echols gets the Gators going

Trailing 1-0 in the third inning, Florida needed a spark offensively. With two outs, Lindaman dropped a single into shallow right; the first hit of the game for the Gators. Next up, Charla Echols whacked a skyscraper shot to center that barely eclipsed the fence and the glove of Florida State’s leaping center fielder. Echols’ dinger resulted in a 2-1 Gators’ lead.

The home run was Echols’ eighth of the year. Echols and Lindaman each recorded a two-out, two-run homer against FSU.

The Noles’ jumped out to a quick 1-0 lead when Elizabeth Mason connected for an opposite field homer. For Florida starter Rylee Trlicek, that home run was the first and only one she has allowed this season.

Trlicek settled down, throwing four complete innings and yielding only two hits. Her outing did not land her in the win-column, but Walton applauded her efforts against a solid FSU team.

Florida (23-4) closes out its home stand against the number 24 Baylor Bears (19-5) this weekend. Despite the importance of this top-25 series, KSP Stadium will be a bit emptier than usual. UF and the SEC announced that fans are not allowed at athletic events until at least March 30, due to the Coronavirus pandemic.