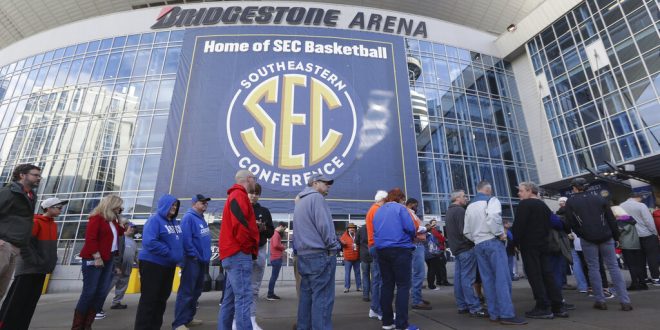 The SEC responds to the coronavirus, COVID-19, with the decision to suspend activities due to growing fears.

UPDATE (12:40 p.m.): The SEC announced that all regular season and championship competition have been suspended until March 30.

SEC Commissioner Greg Sankey announced Wednesday night that league events would continue but without the presence of fans. Beginning on Thursday, only families and essential game day personnel will be allowed in the venues.

The first event to experience this motion is the SEC men’s basketball tournament in Nashville. The tournament began Wednesday, with fans in the arena at both games. Thursday night, though, Sankey had to make a decision regarding widespread panic about the pandemic.

It is no secret that the COVID-19 will establish a growing sense of concern and worry throughout the world and the United States. The pandemic’s latest victim became sporting events in the US, including the suspension of the NBA season and the ban of fans in college conferences. The SEC is a league that will see a substantial influence from these changes.

The Southeastern Conference is known for providing large-scale and boisterous fan presence at most of its events. With spring sports like baseball, softball and lacrosse in season, this dominating fan presence will be gone. It is hard to say immediately how the lack of fans in venues will affect the games themselves. However, it could be said that visiting teams have an advantage they’ve never had before.

There will be no visiting hecklers. No cheering or booing from the fans will be heard. The home-field atmosphere will essentially cease to exist. Ultimately, this will work to take away the entire concept of a home-field advantage.

Full details at the link below: https://t.co/SZHXih5Nyb

While Florida sports will still continue to commence, the fans will not enjoy the games live. Baseball, softball and lacrosse remain in season at this point in the year. As Gator baseball heads into their first SEC weekend series against Georgia, McKethan Stadium will remain empty.

Florida softball will also experience a game with no crowd. The team is set to play a series against Baylor this weekend at home. Gator lacrosse has lost games due to the virus. The Ivy League made the decision to cancel all spring season sports. Gators lacrosse was set to play both Princeton and Brown this season.