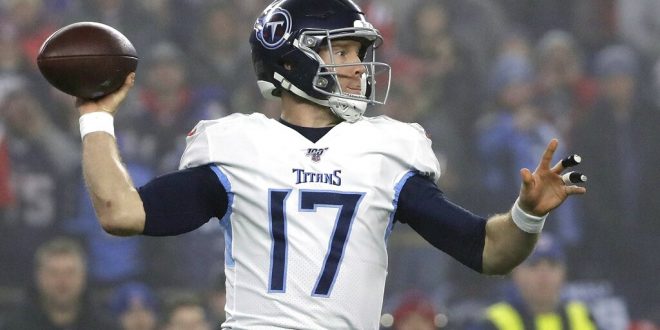 FILE - In this Saturday, Jan. 4, 2020, file photo, Tennessee Titans quarterback Ryan Tannehill passes against the New England Patriots in the first half of an NFL wild-card playoff football game, in Foxborough, Mass. In a deal announced Sunday, March 15, 2020, the Titans agreed to a four-year, $118 million extension with Tannehill. (AP Photo/Elise Amendola, File)

Any rumors of Tom Brady going to Tennessee were finally shot down on Sunday after the Titans reached a four-year agreement with Ryan Tannehill for up to $118 million.

The former first-round draft pick out of Texas A&M is coming off a career year in which he made his first ever Pro Bowl appearance and won NFL’s Comeback Player of the Year. In just 12 games, Tannehill threw for nearly 3,000 yards while completing over 70 percent of his passes. The former Miami Dolphin led the 9-7 Titans to two road playoff wins last season before losing to the Kansas City Chiefs in the AFC Championship.

Tannehill’s success last season was remarkable considering he came to the Titans “just a year ago” as a “backup quarterback … behind Marcus Mariota.”

The Titans return most of the offensive personel from last year’s AFC title game run. Running back Derrick Henry is staying in Nashville after the team put the franchise tag on him. Other players remaining in the Music City include the receiving tandem of Corey Davis and A.J. Brown, who both remain on their rookie contracts.

As rumors surrounding Tom Brady’s future linger, Tennessee is officially no longer a viable option. According to a recent post on social media, Brady will not consider returning to New England either.

This leaves the 6-time Super Bowl champion with a list of potential landing spots that includes Los Angeles and Tampa Bay.

In the wake of Tannehill’s signing, Marcus Mariota agreed to a deal with the Las Vegas Raiders. There, the former second overall draft selection will battle Derek Carr for the starting quarterback job. Mariota was benched in Tennessee in favor of Tannehill, which sparked the team’s turnaround. Following Mariota’s departure, Logan Woodside will rise up Tennessee’s depth chart to backup quarterback.

Hello, I am currently a junior at UF studying sports media journalism with a concentration in Political Science. I contribute web and radio content weekly for WRUF ESPN Gainesville. Be sure to check out some of my recent articles!
Previous COVID-19: Yankees to leave Tampa
Next Dodgers forced to wait for redemption