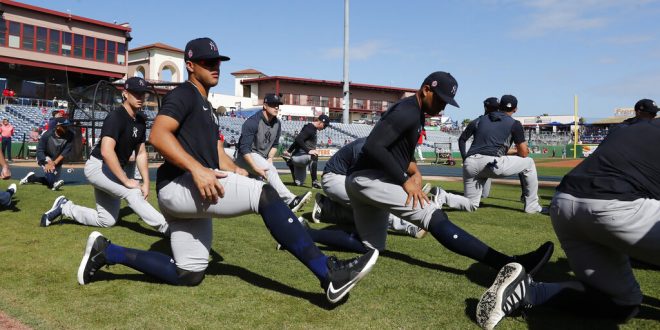 Despite initially voting to stay in Tampa and continue on with Spring Training, the New York Yankees will head home.

In a meeting with the team on Friday, the players voted to stay in Florida and use Steinbrenner Field’s facilities. Meanwhile, due to the COVID-19 outbreak, spring training exhibitions had been canceled. Yet, the MLB had yet to postpone the season’s April 9 start date, and teams were excited to continue working towards Opening Day.

However, all of this changed on Sunday when the MLB unveiled new plans.

In a memo sent out to all 30 teams, non-roster players were encouraged to go home. Meanwhile, members of the 40-man roster were permitted to stay with a couple of conditions. Per the MLB, those who remained on site were to avoid training with a significant number of other players.

With the leagues new restrictions, it began to set in for players that an April 9 Opening Day was seeming less likely. It was later announced on Monday that season would not get underway until mid-May, at the earliest.

According to the New York Post’s Joel Sherman, many of the Yankees felt that the new conditions defeated the purpose of being unified in Tampa.

#Yankees manager Aaron Boone tells @MLBNetworkRadio that it "is becoming harder and harder" to have workouts at Steinbrenner Field. His plan is now to return to New York in the next day or two.

As a result, members of the Yankees’ organization will head back to their respective homes.

The first confirmed case of coronavirus in the MLB was announced on Sunday.

Denny Larrondo, a 17-year-old Yankees prospect, tested positive for the COVID-19 virus after having been quarantined since Friday.

Yankees confirm that a minor leaguer tested positive for coronavirus. He was never present at Steinbrenner Field, according to the team, but was at the minor league complex.

After confirming the case, the rest of the Yankees’ prospects are being quarantined.

Members of the Yankees who decided to stay in Tampa could resume training as early as Tuesday morning.

However, the new start date for the Major League season remains unknown — as do any plans of an additional Spring Training.

Ainslie is a journalism major at the University of Florida where she specializes in Sports Media. Her main passion is college football as it was a huge part of her childhood. Ainslie serves as a current correspondent for the Ocala Star-Banner, a newspaper for the Ocala, Florida area. She currently covers Marion County high school sports.
Previous Stephen Curry Being Proactive While NBA Is Suspended
Next Ryan Tannehill reaches 4-year agreement to remain with the Titans