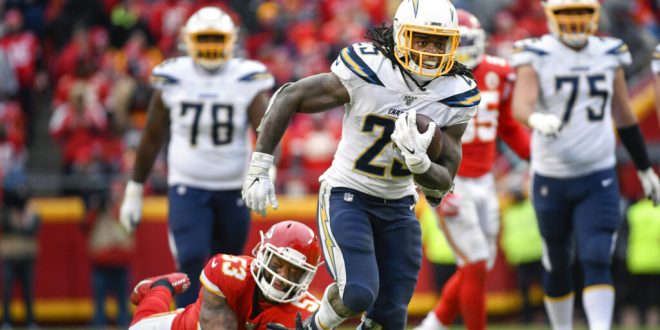 Melvin Gordon is trading in his gold and light blue for orange and navy.

On Friday, the former Chargers running back signed a two-year, $16 million deal with the Denver Broncos. Gordon spent his first five years with the Chargers and was reportedly looking for a new contract. His quest for a better deal comes at no surprise. He held out for the entirety of the 2019 preseason and first three weeks of the regular season in hopes of negotiating a better contract.

Though he returned to the team in Week 4, Gordon did not take the field until the Chargers’ Week 5 game. He earned 31 yards on 12 carries in the 20-13 loss that put the Chargers at 2-3 on the season. Their opponent? None other than the Denver Broncos.

Gordon’s unhappiness carried onto the field. Over the course of the 2019 season, he rushed for 612 yards on 162 carries and scored eight touchdowns. Speculation floated that the season would be his last in L.A. On March 19, after news broke that he was once again in disagreement with the team, those rumors seemed to hold a lot more truth.

Only 24 hours passed before more news of his signing with Denver trickled out. But while Gordon had indeed left his former team, he had not left their division. Both the Broncos and the Chargers sit in the AFC West, and the teams are slated to play each other twice in the upcoming regular season.

Fellow analyst Ryan Clark believes this is an opportunity for Gordon to show his worth. He could potentially earn a longer contract with the Broncos, he says.

Will he stay in Denver for longer than his current contract? The answer to that question will come as the 2020 season unfolds. For Gordon, signing with Denver means a chance to start over. And when the Broncos face the Chargers in the fall, he’ll be able to prove, once and for all, that he is worth everything they wouldn’t give him.