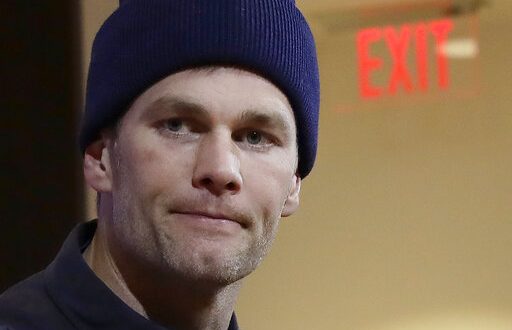 FILE - In this Jan. 4, 2020, file photo, New England Patriots quarterback Tom Brady listens to a question at his post-game news conference after the Patriots lost to the Tennessee Titans in an NFL wild-card playoff football game in Foxborough, Mass. Brady said on social media, Friday, March 20, 2020, he has signed with with the Tampa Bay Buccaneers. (AP Photo/Elise Amendola, File)

After spending 20 seasons with the New England Patriots, quarterback Tom Brady has decided to join the Tampa Bay Buccaneers after signing a two-year contract worth $50 million guaranteed and an additional $9 million in performance-based incentives.

Tampa Bay Wide Reciever Chris Godwin is excited to have Brady join him. “He reached out to me just saying that he was excited to come down and play. You know obviously being a guy that has watched him my whole career and getting the opportunity to play with him is a blessing. I am trying to take full advantage of that and I let him know that I was excited to play with him, as I’m sure a lot of guys are,” said Godwin.

Godwin and Brady both rep a number 12 jersey, meaning one will need to give it up. According to Godwin, there hasn’t been any discussion on who that would be.

OT Donovan Smith is also looking forward to working with his new teammate. “I’ve seen a lot of Brady. He’s definitely been doing this thing for twenty years and is still arguably the GOAT, the walking GOAT of football right now. For him to come into Tampa Bay and being able to protect him is gonna be fun,” said Smith.

Behind The Brady Signing

The Boston Globe’s Jim McBride said he is unsure of exact reasons for Brady’s decision to leave. “When Tom reached out to Robert (Kraft) last night and Tom stated his case, Robert said it was clear that Tom had been thinking about this for a while. It became clear that he wasn’t going to change his mind. So what actually was said in that conversation probably was a pretty passionate plea by Tom that said it’s time to move his family on,” said McBride.

#Patriots owner Robert Kraft told me he thought Tom Brady was calling to work out a new contract Monday night. "He convinced me it was best for him to move on and sometimes when you love someone like a family member, you just have to respect it and let them do their thing."

Many speculate of possible falling outs that Brady may have had with the organization that led to his departure. Sportswriter Mike Florio said, “He didn’t place blame on anyone but it’s funny, he didn’t thank anybody either. He thanks the fans, he didn’t thank Robert Kraft, he didn’t thank Bill Belichick. He didn’t mention anyone by name. People will wonder like I am right now, what does that mean?”

Parker Welch is a Junior at the University of Florida majoring in Sports Media at the College of Journalism & Communications.
@parkerrwelch
Previous Olympic Pole Vault Medalist Sandi Morris Talks Coronavirus
Next Winston and Newton still available