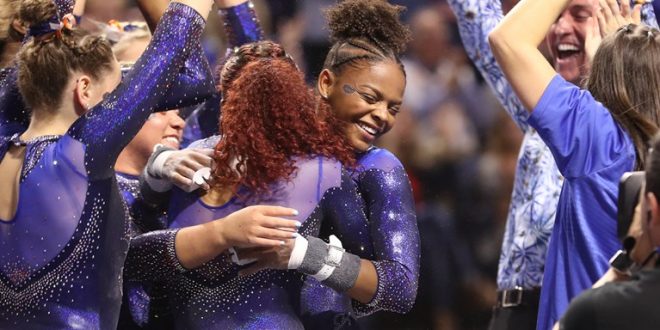 A happy Trinity Thomas after scoring a 10.0 on uneven bars during their meet with LSU. Photo taken from The University of Florida Gymnastics page.

These four gymnasts earned nine total All-American honors and are ranked second nationally for total 2020 honors for a program.

The Gators star sophomore swept the board with the maximum five All-America honors – all-around, vault, uneven bars, balance beam and floor exercise. She is just one of three in the nation to collect the maximum honors.

Thomas received first-team placement on all events except vault, where she was placed second. She is only the second Gator to earn the maximum honors, joining Bridget Sloan in 2014 and 2016.

She is the only gymnast to earn a perfect 10.0 on three different events in 2020 and also led the gators with 28 event wins over the season.

Baumann was the second Gator to earn multiple All-America honors. Her two honors came on floor and balance beam. This brings her career total of regular-season honors to four.

She received first team honors on the floor exercise and second team honors for balance beam. Baumann earned six marks of 9.925 or higher on floor. She also raised her collegiate floor best to 9.975.

She also earned seven consecutive beam marks of 9.90 or above.

Gowey earned the first 10.0 of her collegiate career at Penn State on the apparatus and also scored 9.90 or better on eight appearances on beam.

Schoenherr rounded out the Gators awards with second team honors in the uneven bars, which was her first All-America honor.

She earned a nearly perfect mark on 9.975 on the event versus LSU and also won her first collegiate uneven bars title versus Denver and Iowa State.

Schoenherr had five bars routines that scored 9.90 or better. Three of the routines were a 9.95 or better.