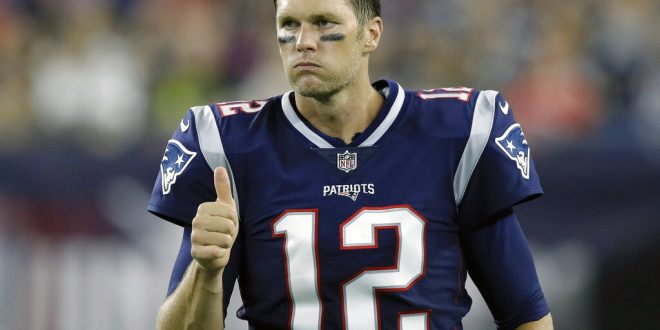 FILE - In this Aug. 16, 2018, file photo, New England Patriots quarterback Tom Brady signals a thumbs-up on the sideline during the second half of a preseason NFL football game against the Philadelphia Eagles in Foxborough, Mass. Six-time Super Bowl champion Tom Brady has signed a two-year contract with the Tampa Bay Buccaneers, saying he is embarking on a “new football journey.” The 42-year-old quarterback who spent the first 20 years of his career with the New England Patriots announced his decision Friday, March 20, 2020, in an Instagram post and thanked the Bucs for the opportunity.(AP Photo/Charles Krupa, File)

It’s the end of the 2019-2020 season and Tampa Bay Buccaneers QB Jameis Winston just finished the season with over 5,100 passing yards, 33 touchdowns, and 30 interceptions. The Bucs, however, won only seven games and continued their playoff drought.

Tom Brady is now set to become a free agent for the first time in his 20 year career. The Bucs considered replacing Winston, who became just the 12th player in NFL history to throw 30+ INTs in a season, a good place to start.

Arians’ most telling quote on going from Jameis to Brady:

“We were so close last year. I mean 7-9 doesn’t sound close, but you eliminate 20 turnovers, we’re in there.” https://t.co/ItY7aPTKLy

As Bruce Arians told the media, the Bucs looked at all the quarterbacks that just finished their contract. It did not matter if they were likely to move teams. Arians said the Buccaneers front office “did all the film work, did all the study work just in case.” After some time, Brady was the clear number one option for them.

Excited about “the greatest quarterback to play the game of football,” Bucs GM Jason Licht believes Brady will immediately make the team better.

It was a tough decision for the legendary quarterback to leave the place where he played for 20 years. “It’s not like I’m 25, where I just basically pack a suitcase and go,” he said. “I have three kids, and it’s just changing a little bit of our life — but that’s life, and that’s what people do.”

Brady’s future with the Bucs

Tom Brady has won six Super Bowls. Many players on his new team have never even played in the playoffs. Brady could easily request a change, and it would happen. He does not want that though.

He wishes to take the necessary time to learn how the Bucs play and adjust to them. “There’s a lot of things I’ve gotta get up to speed on. Obviously learning different terminology, that’s a unique challenge that I haven’t faced, but it’s one that I’m looking forward to also.” he said.

One thing Brady can definitely get excited about is the offensive firepower he will have. Mike Evans and Chris Godwin are some of the league’s best wideouts and OJ Howard is a quality pass catching tight end.

Brady will be joining the team that lead the league in passing yards last season. Brady, last season, threw for the fewest amount of yards since 2006 in seasons that he played all 16 games. With Jameis throwing for 5,100+ yards and Brady seen as a better quarterback than Winston, there is no telling how this season can go.

Jensen Young is a journalism student at the University of Florida. He works as a sports writer for WRUF.com and is the voice of trendings on Wednesday mornings on the WRUF radio station.
@Jensen_Young9
Previous Four Gator Gymnasts earn All-America Honors
Next Noah Syndergaard undergoing notorious Tommy John surgery