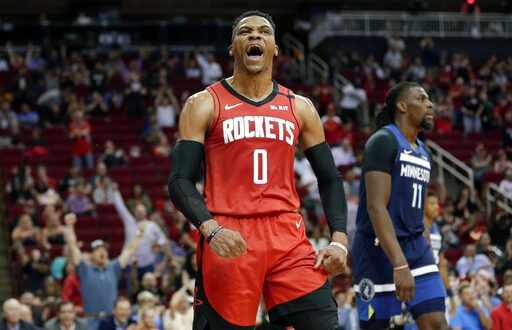 Houston Rockets guard Russell Westbrook (0) reacts after a dunk, next to Minnesota Timberwolves center Naz Reid (11) during the second half of an NBA basketball game Tuesday, March 10, 2020, in Houston. (AP Photo/Michael Wyke)

While the NBA’s season remains at a halt due to the coronavirus, one of its stars is helping those in need amidst the pandemic.

A native of the Los Angeles area, Russell Westbrook is giving back to his hometown through the Angeleno Campaign. The fund, launched by Mayor Eric Garcetti, aims to raise $10 million for low-income LA families affected by the crisis. Westbrook and his wife Nina have helped kickstart the fund with a major contribution through their Why Not Foundation.

The couple has a history of giving back to the community, as the Why Not Foundation was founded in 2012 to help children facing hardships.

Westbrook aims to assist up to 20,000 in-need residents, particularly those who are not eligible for government benefits. Affected families will be able to apply for pre-paid debit cards in order to obtain essentials.

On Thursday morning, Westbrook joined ABC’s “Good Morning America” to raise awareness and discuss his motivation to give back. He described his large platform as an NBA superstar as “a blessing” that he takes full advantage of.

On the Angeleno Campaign, specifically, he’s excited to help in “a desperate time like this”:

The Westbrooks took to Twitter on Monday night to raise awareness for their campaign and explained how to donate.

Those who want to help can either visit https://mayorsfundla.org/Angeleno/ or text “LALOVE” to 21000.

2020 presidential hopeful Joe Biden quote-tweeted Westbrook on Wednesday and cited his efforts as a great example of character in the face of crisis.

The character of the American people is on full display across the country. In the middle of a crisis, folks are stepping up and doing what they can to help out those in need. The Angeleno Campaign, led by my friend Mayor @EricGarcetti, is a great example of the work being done. https://t.co/eo8GGH6hmG

As far as basketball goes, the season is still suspended indefinitely, but Westbrook is enjoying the downtime at home with his family:

“I’m blessed to be home with my family,” the Rockets star point guard said.

The season was put to a halt on March 11th, and most owners view mid-to-late June as a best-case scenario for play to resume, according to ESPN’s Adrian Wojnarowski. However, Mavericks owner Mark Cuban is a bit more optimistic. In a Monday interview with WFAA of Dallas, he said that he envisions games played in mid-May without fans in attendance.