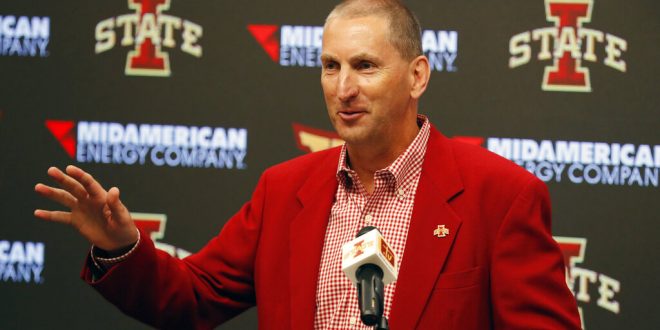 FILE - In this Aug. 1, 2018, file photo, Iowa State Athletic Director Jamie Pollard speaks during an NCAA college football news conference, in Ames, Iowa. Iowa State has announced a one-year, temporary pay reduction for coaches and certain staff to save more than $3 million. The school will also suspend bonuses for coaches for a year to save another $1 million. "So much has changed in the world in a very short time," athletic director Jamie Pollard said in an open letter to Cyclones fans. “It is even more daunting to realize our world will keep changing at a rapid pace for the foreseeable future.” (AP Photo/Charlie Neibergall, File)

Iowa State is scrambling from what is already lost and what could be lost. The 15-year Iowa State athletic director Jamie Pollard plans to cut coaches’ salaries.

To avoid layoffs, budget cuts are being made. Pollard explained his reasoning and the specifics of the cuts in his letter to Iowa State fans. Here are some cuts from the letter:

Iowa State took a hit of five million dollars from the cancellation of the Big 12 Men’s basketball tournament and NCAA tournament. Of course, this was a big loss for all universities, but a little bigger for Iowa State.

In 2001, the department dropped baseball and men’s swimming so the cash is limited. This puts Pollard into a situation where he needs to act quickly before things get out of control.

The Atheltic estimates that 50 Iowa State athletic department employees make up around 75 percent of the $27 million payroll. This gave Pollard the opportunity to reach out to those employees and explain his reasoning for cutting their pay. The Iowa State staff is all in. This decision could benefit their university in the long run.

I could not be prouder of all our coaches and staff for uniting as one on these tough decisions that will save over $4M annually. Letter To Iowa State Fans – Iowa State University Athletics https://t.co/McVZ7J8mEA

Pollard felt good about the staff working together during these hard times.

“I’m proud to work with people that came together in a short period of time to say, ‘Let’s do this because it’s the right thing to do,’” Pollard said. “This is the kind of unity everybody needs to have. Unprecedented times call for drastic measures. Hopefully, other universities and athletic departments follow suit and start their own fallback plan.”

Other people involved are more optimistic than Pollard. Clemson head football coach Dabo Swinney is confident there will be a college football season.

Dabo Swinney about preference for 2020 season re abbreviated or being pushed back:

"I have zero doubt we are going to play…. This is America, man. This is the greatest country in the planet. We will rise up and kick this in the teeth. September is a long time away, man."

I think we are all as hopeful as Dabo. As April begins and the virus seems to be getting worse, there are two sides to take for the future of college football. One is Dabo’s, with blind confidence and optimism that there will absolutely be a season. And there is Pollard’s side, where the want for football is just as big. But there is an understanding of the circumstances and a serious plan for a worst-case scenario.

Previous WWE’s WrestleMania 36 to Take Place This Weekend; First Time With No Audience and Over Two Days
Next FHSAA pushes all spring activies back to May 3