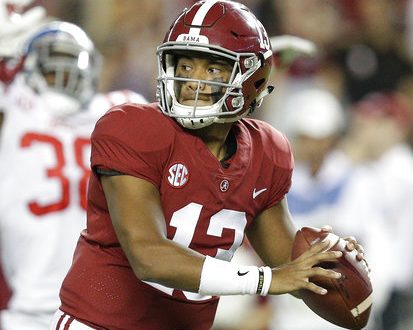 Alabama quarterback Tua Tagovailoa sets back to pass during the second half of an NCAA college football game, Saturday, Sept. 30, 2017, in Tuscaloosa, Ala. (AP Photo/Brynn Anderson)

Quarterback Tua Tagovailoa Was always going to bring some level of medical uncertainty to whatever team drafts in the 2020 NFL Draft. But 17 days from the big event, there is still a level of uncertainty surrounding the draft that is unparalleled to any draft in football history.

The logistics of what will be a “virtual draft” have yet to be specifically announced by the league, ESPN or NFL Network, though Peter King reported that the two networks will likely join forces to put on a broadcast.

The first round of the NFL Draft kicks off on April 23rd, but until then, the two networks have continued to inject heavy draft coverage into their programming.

Aside from a handful of hosts and on-air personalities, a majority of talent ― and all interviewees ― have tuned in from homemade studios. That includes former head coach Rex Ryan, who now contributes to ESPN’s football coverage.

Tagovailoa missed three games in 2019 with a hip injury and one game with an ankle injury, and Ryan was quick to mention these as a potential recipe for disaster at the NFL level.

Despite the medical flags, Tagovailoa is still projected by many to be taken at or prior to the Los Angeles Chargers’ pick at No. 6. As a reference point, none of the seven analysts who made mock drafts on NFL.com had Tagovailoa falling past that selection.

However, Ryan warns teams that selecting Tagovailoa early could cost a lot of people their jobs.

And Ryan believes the match could be beneficial for both parties.

While Ryan loves the idea of bringing Tagovailoa to Miami, the Dolphins have two other first-round picks, which could act as insurance in case Tagovailoa doesn’t pan out.

Ryan said any other team that drafts him will take a historic risk.

Of course, only time will tell if the investment in Tagovailoa pays off for a team. His injury history has been widely criticized, but there’s also a reason that he’s being considered as a top-five pick.

Tagovailoa will make the official jump to the NFL on April 23 on a network that has yet to be announced. The later rounds will likely be broadcast over the course of the following two days.