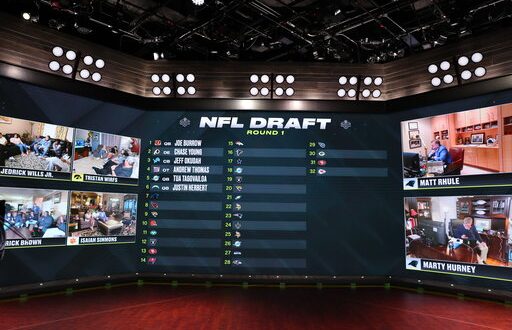 In a photo provided by ESPN Images, the first six selections in the NFL draft are displayed during ESPN's coverage of the NFL football draft, Thursday, April 23, 2020, in Bristol, Conn. (Allen Kee/ESPN Images via AP)

The Sunshine State shined bright on the NFL’s biggest stage Thursday night. The Miami Dolphins, Jacksonville Jaguars and Tampa Bay Buccaneers made a total of six selections and two trades in the first round of the 2020 NFL Draft.

The Dolphins entered the draft with an embarrassment of riches: a record 14 draft picks.

In case you didn't know, the #Dolphins have a whopping 14 draft picks entering the NFL Draft.

That ties a record for the most draft picks in the 7-round format… set by the Dolphins in 1997.

While speculation was that the Dolphins would be targeting a quarterback, there were enough rumors and reports to confuse even the best draft experts into what Miami would be doing. In the end, it paid off as the Dolphins took the guy they wanted all along at No. 5: quarterback Tua Tagovailoa.

The prolific, left-armed quarterback from Alabama raised some concerns with his medical history, although the nature and timing of the injuries allowed Tagovailoa to only miss 4.5 games.

Considering the team’s infamous decision to pass quarterback Drew Brees in 2006 because of injury concerns, some were wondering if the decision would affect the franchise’s view on Tagovailoa.

According to ESPN’s Laura Rutledge, choosing Daunte Culpepper over Brees likely had little to do with the team’s decision.

Of course, Miami’s draft-night activities didn’t stop there. The Dolphins held the No. 18 and No. 26 picks as well. By the time the team was on the clock for the second time of the night, the card was sent in for some protection for Miami’s new franchise quarterback.

The USC offensive tackle turns 21 next month and is widely considered to be a high-upside player, though refinement is expected if Jackson is to become an immediate contributor on the Dolphins’ offensive line.

Miami was scheduled to be on the clock at No. 26, but they opted to trade down to No. 30 with the Green Bay Packers, acquiring a fourth-round pick in the process. With the selection, the Dolphins added to a cornerbacks’ room that already features proven starters in Byron Jones and Xavien Howard.

The Auburn cornerback was a curious pick, and not just because of the two expensive veterans already ahead of Igbinoghene on the Dolphins’ depth chart.

Igbinoghene played outside cornerback for the Tigers, the same position that both Jones and Howard play. If all three are to take the field at the same time, one of them will likely have to shift inside.

Like the Dolphins, the Jaguars also had multiple selections Thursday night, as they held the No. 9 and No. 20 picks. Unlike Miami, Jacksonville opted to stay put. Their first selection was someone who Gators fans may be familiar with.

Cornerback C.J. Henderson added to the organization’s storied history with former Florida Gators. Since the team’s first draft in 1995, the Jaguars have selected six Gators in the first round.

The night didn’t end there for the Jaguars, as Jacksonville landed another SEC defender when the team selected LSU edge rusher K’Lavon Chaisson at No. 20.

Chaisson was projected by multiple draft experts to be taken before the Jaguars’ second selection. He’s expected to add versatility to the team’s defense, a trait that Chaisson had previously said that makes him so special.

The Buccaneers were the only team from Florida to have one selection in the first round, but they made the most of it.

After surrendering the second-most sacks in 2019, the offensive tackle was arguably the biggest need. And they filled that hole by moving up one pick with the San Fransisco 49ers — and trading them a fourth-round pick — to select Iowa OT Tristan Wirfs.

ESPN’s Mel Kiper had Wirfs as his 10th-best player on his big board, but his ESPN colleague Marcus Spears might think even higher of the Iowa tackle.

Rounds two and three of the 2020 NFL Draft kick off at 7 p.m. on ESPN and ABC Friday night. As it stands, the Jaguars and Buccaneers have a pick in each round, while the Dolphins have two in the second and one in the third.