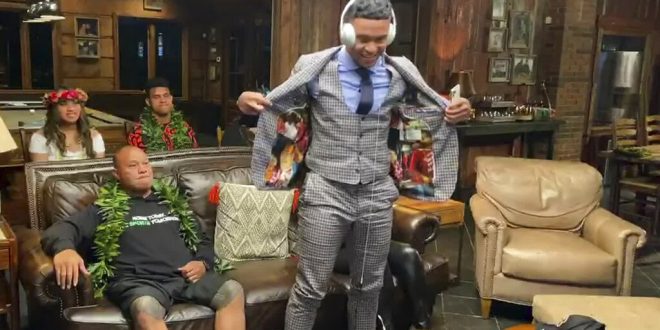 In this still image from video provided by the NFL, Tua Tagovailoa shows off the lining of his jacket during the NFL football draft Thursday, April 23, 2020, in Alabaster, Ala. (NFL via AP)

The 2020 NFL draft has come and gone. the Dolphins got their guy for the future, while the Buccaneers walked away with plenty of help for newly signed Tom Brady.

Everything new @MiamiDolphins QB Tua Tagovailoa does is for his family.

Now, he's living out his dream with them watching. ❤️ @Tuaamann pic.twitter.com/AtGcbi7I75

With three picks in the first round, Miami addressed the biggest need early. The Dolphins have needed a franchise quarterback for a long time, on Thursday night they selected Alabama’s Tua Tagovailoa.

Talent is certainly there, Tagovailoa has led Alabama’s offense to several high scoring seasons. He has displayed accuracy, touch, pocket presence, arm strength and mobility. A clearly talented quarterback that could have easily been the number one pick if not for injuries.

A gruesome hip injury that ended his final season at Alabama early was an addition to an already growing list of concerns. If he can stay healthy, the Dolphins should have their franchise quarterback.

Accumulating first round picks is not easy. Miami had to ship second-year safety Minkah Fitzpatrick and a talented tackle in Laremy Tunsil. Replacing players of this caliber is not easy, but you can’t say the Dolphins didn’t try.

Selecting Austin Jackson out of USC will offer Tagovailoa some much needed protection. Meanwhile, the selection of Auburn’s Noah Igbinoghene will help shore up the secondary. While Igbinoghene plays corner, his contribution will be compared to Fitzpatrick.

When the NFL season starts, Tom Brady will be 43 years old. He will have the luxury of throwing to players like Chris Godwin, Mike Evans and his old friend, Rob Gronkowksi. To make his job easier, the Buccanneers gave him some help of front.

With the 13th pick, Tampa Bay selected Iowa tackle Tristan Wirfs. An extremely talented and athletic tackle should step into a starting role day one to protect Brady.

Later in the draft, the Bucs got a potential steal. Minnesota’s Tyler Johnson is a talented route runner that should have never lasted until the 161st pick. Johnson is a reliable route runner who excels at getting open. While Godwin, Evans and Gronkowski demand attention, Johnson should be able to carve out a role as someone Brady can trust.

The Buccaneers made sure Brady is set up for success on offense. They also made sure to add talent on defense. Second round pick Antoine Winfield Jr. is one of draft’s best safeties and will help sure up Tampa’s secondary.