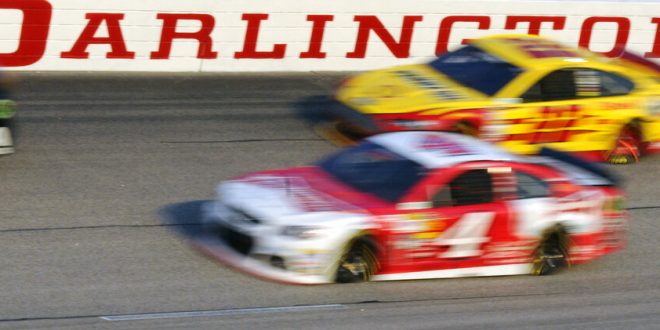 FILE - In this April 12, 2014, file photo, Kevin Harvick (4) and Joey Logano (22) race during a NASCAR Sprint Cup series auto race at Darlington Raceway in Darlington, S.C. NASCAR will get its season back on track starting May 17 at Darlington Raceway in South Carolina without spectators, and the premier Cup Series plans to race four times in 10 days at a pair of iconic tracks. The revised schedule released Thursday, April 30, 2020, goes only through May and has a pair of Wednesday races — fulfilling fans longtime plea for midweek events. (AP Photo/Mike McCarn, File)

NASCAR has announced its plans to resume its season without fans in May. They join the UFC as the only two major sports organizations to announce specific return-to-play plans since the COVID-19 pandemic shut down U.S. sports in mid-March.

In contrast, Little League International has made the decision to cancel its World Series and Region Tournaments for the first time in organization history.

NASCAR announced Thursday its plan to return to racing on Sunday, May 17, at the Darlington Raceway. This race will serve as the first of seven races over an 11-day time span.

“NASCAR and its teams are eager and excited to return to racing and have great respect for the responsibility that comes with a return to competition,” said Steve O’Donnell, NASCAR executive vice president and chief racing development officer.

NASCAR’s revised schedule goes only through May. The NASCAR Cup Series, NASCAR Xfinity Series and NASCAR Gander RV & Outdoors Truck Series will each host their first on-track event since March.

No dates beyond May 27 have been announced. The organization plans to announce further schedule updates at a later date. Although, NASCAR officials say that the sanctioning body intends to run a full 36-race NASCAR Cup Series slate in 2020.

The organization has worked with local and state health officials to ensure these events are held safely.  NASCAR will not allow practice sessions for any event, and qualifying will only be held for the Coca-Cola 600.

In addition, fans will not be able to attend any of NASCAR’s return events. Only essential staff and personnel will be permitted.

NASCAR has mandated the use of protective equipment, health screenings for all individuals before entering the facility and maintaining social distancing protocols.

“NASCAR will return in an environment that will ensure the safety of our competitors, officials and all those in the local community. We thank local, state and federal officials and medical experts, as well as everyone in the industry, for the unprecedented support in our return to racing, and we look forward to joining our passionate fans in watching cars return to the track,” said O’Donnell.

For the first time in history, Little League International has decided to cancel its seven World Series tournaments and their respective regional qualifying events.

“After exhausting all possible options, we came to the conclusion that because of the significant public health uncertainty that will still exist several months from now, and with direction from Pennsylvania Governor Tom Wolf and Secretary of Health Dr. Rachel Levine, as well as senior public health officials and government leaders from locations where our other six World Series are held, as well as the their qualifying regional tournaments, it will not be possible to proceed with our tournaments as we’ve hosted them for nearly 75 years,” said Stephen D. Keener, Little League President and CEO.

Due to the COVID-19 pandemic, 82 regional qualifying tournaments and their respective seven World Series events have been canceled.

Additionally, the 2020 MLB Little League Classic, originally scheduled for August 23 between the Boston Red Sox and Baltimore Orioles, has been canceled.

“A lot of kids dream of getting to Williamsport, and that’s not going to happen this year. It’s really heartbreaking for us,” said Keener. “We’re really going to miss that this year. But we have a great partnership with Major League Baseball, and we look forward to making 2021 even bigger and better.”

2021 was originally supposed to be the playing of the 75th Little League Baseball World Series. That celebration will now be postponed to 2022.

Previous Will the NBA G League Be a Threat to the NCAA?
Next Florida men’s basketball lands verbal 2021 commit Kowacie Reeves