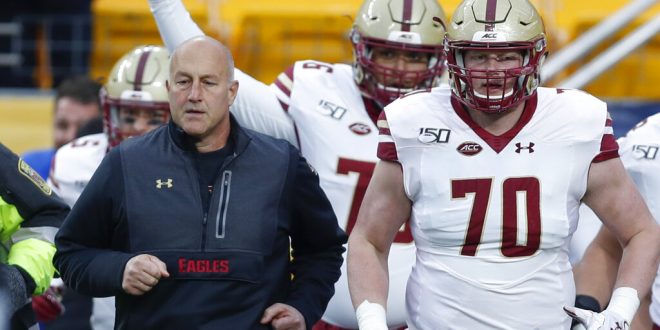 Steve Addazio agreed to become the next Colorado State head coach last December. The former Florida assistant coach has a 57-55 record as a head coach, and is looking forward to the fresh start at Colorado State.

Steve Addazio was an assistant coach for Florida during Urban Meyer’s time in Gainesville. He was a tight ends coach from 05-06, an offensive line coach from, 07-08 and was offensive coordinator from 09-10.

Addazio went on Sports Scene with Steve Russell to talk about his time with Florida. “It was a special time. I knew it when we were there.” said Addazio. “We had a great staff, lead by and elite AD and an elite head coach.”

Of course, Florida won two national championships during his tenure at UF.

In 2011, Steve Addazio moved on from Florida, and became the Temple head coach. He went 13-11 in two seasons with Temple, and then Boston College hired him. At Boston College, Addazio went 44-44 in seven seasons.

Colorado State officially hired Addazio on December 11, 2019. Since then, Addazio was able to recruit, and have seven spring practices before COVID-19 shut everything down. Addazio said he did get a good look at his team, and he thinks they have the potential to be good in the Mountain West.

Addazio also commented on how he is handling the current situation. “You actually find yourself working more hours. I’m and on this phone or on the computer from 7 in the morning to 7 at night.” said Addazio.

The Rams are coming off a 4-8 season, and the season before that, the Rams went 3-9. Former Rams coach Mike Bobo left the program after the 2019 season, and Colorado State turned to Addazio to be the next head coach.

Colorado State has the potential to be good this year. Coach Addazio said he has the best group of receivers he’s ever had as a head coach. However Addazio also mentioned there is work to do along the Rams offensive line. It will be interesting to see what kind of team Addazio puts together given the circumstances this off-season.