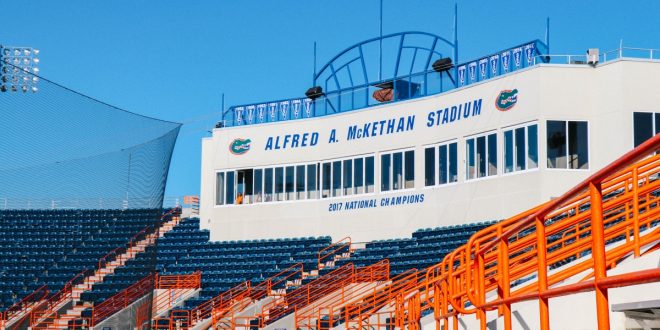 McKethan Stadium, Perry Field, the long time home of Gator baseball, will be torn down in the next few weeks as the Gators move into a new stadium.  There have been a lot of great accomplishments and fine coaches who have led the Orange and Blue baseball squads, and one of them, former coach Jay Bergman, talked with us about his time overseeing the program from 1976 to 1981.

In his time at Florida, Bergman qualified for NCAA Regionals in 1977, 1979, and 1981. He also brought home an SEC Championship in 1981. Spending six seasons in Florida, the skipper posted an overall win-loss record of 216-113. Up until that time, it was the best multi-season record Florida had and it is the second best tun in Florida baseball history.

“The 70s was the start of what really got that momentum going for the Gators,” Bergman said.

Appearing on ESPN Gainesville’s Sportscene with Steve Russell recently, Bergman talked about coaching a lot of great players who moved on to the big leagues and who left their mark on Florida.

Something unique about Bergman’s time with Florida is that he and his team took on the New York Yankees. The idea of a college team playing a professional team is a rarity. During his conversation with Russell, Bergman mentioned how many players still reminiscence about their hand at battling the Yankees at a spring exhibition game.

How did Florida get lights?

It is hard to imagine a time when Perry field, also known as  McKethan Stadium, didn’t have lights. But back in the seventies, no such light poles existed. Many games had to be played before sundown, until a certain baseball legend aided the Gators in their pursuit of field lights. After playing the Yankees, Bergman talked about how owner George Steinbrenner helped the Gators get lights on their field.

“They were wooden poles, but they were lights.” – Bergman on the new bright additions to Perry Field.

During his interview with the 81 year old coach, Russell shared a laugh about some of the funnier moments during their younger careers. The two were en route to an away baseball game. Flying on an old World War II aircraft, Russell and Bergman joked about the bumpiest flight of their lives.

After the abrupt end to the 2020 season, McKethan Stadium is saying goodbye. Many players, coaches, and fans have enjoyed the history and beauty of the ballpark. The new stadium is nearly complete and Gator fans are excited to watch nine innings in the new arena, but they will also reflect on their time at McKethan Stadium/Perry Field as well.