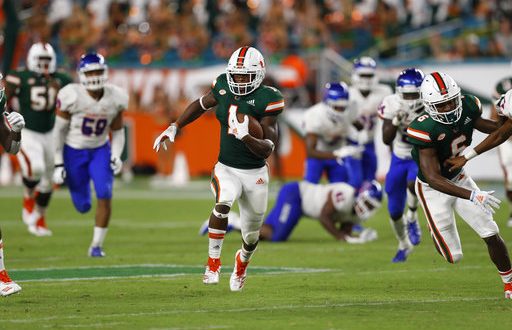 Miami running back Lorenzo Lingard runs in for a touchdown during the second half an NCAA college football game against Savannah State, Saturday, Sept. 8, 2018, in Miami Gardens, Fla. Miami won 77-0. (AP Photo/Brynn Anderson)

Lorenzo Lingard, a former 5-star recruit and former Miami Hurricane will be eligible to play for the Gators this fall. Lingard announced the news on his Twitter account Friday.

Lingard, from Orange City, Florida, committed to Miami in 2018. There, he played in six games before suffering a season-ending knee injury. Lingard entered the transfer portal in December 2019. About a week later, Lingard enrolled at UF.

One of the main reasons for Lingard’s transfer was to be closer to his family. Lingard’s father, Lorenzo Lingard Sr. told his son last year he was dealing with kidney and heart issues.

Last fall, Lorenzo Lingard could sense something was wrong back home but didn’t know what.

His dad finally informed him before the UM-Duke game.

“It was pretty tough.”

The #Gators RB transfer opens up about his father’s health & NCAA waiver request.

Since Orange City is closer to Gainesville than Miami, Lingard thought it would be best for him and his family to transfer to UF.

Lingard’s place in the depth chart

The Gators already had a talented running back room before Lingard’s arrival. Guys like Malik Davis, Dameon Pierce and Iverson Clement have all made contributions to the team.

Malik Davis was coming off a broken left foot in 2019. He contributed on special teams last year and carried the ball 34 times. Dameon Pierce had 54 carries and 305 yards in the 2019 season. Iverson Clement had three rushes for 48 yards last year.

Lingard at the very least could just be on the roster to provide running back depth. Best case scenario for Lingard and the Gators is he comes in and starts immediately, while also making the entire running back room better.

Depth at running back was a concern last year for the Gators. It was pretty much all Lamical Perine with some Dameon Pierce mixed in. However, this year, Florida will have four capable running backs, and it will be interesting to see who becomes the starter for game one.