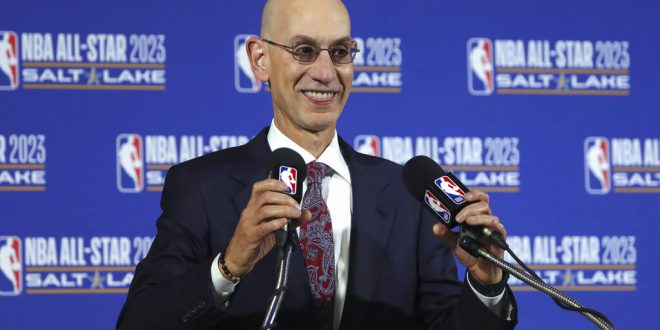 FILE - In this Oct. 23, 2019, file photo, NBA Commissioner Adam Silver speaks during a news conference at Vivint Smart Home Arena in Salt Lake City. Something is finally clear in the uncertain NBA. Players believe they’re going to play games again this season. The obvious questions like how, where and when remain unanswered. (AP Photo/Rick Bowmer, File)

With the fate of the NBA still in question, the league’s Board of Governors will vote on Thursday about when teams will return to the court and how the playoffs will work.

NBA Commissioner Adam Silver is expected to propose a plan for the league to finish its season that includes 22 teams returning to action at ESPN Wide World of Sports Complex. This would bring in the current 16 playoff teams and three additional teams from each conference. In addition, there would be a play-in tournament for the eighth seed.

With the dates still up in the air, it is expected for games to start by July 31 and the season to be finished by October 12 at the latest. Take a listen to ESPN NBA Insider Adrian Wojnarowski for more on the league’s target return.

One of the big items regarding the return to action is the extra teams currently not in the playoffs. Recently, Portland Trail Blazers All-Star Damian Lillard said he wouldn’t play in any games if the Blazers didn’t have a shot at the playoffs.

Currently, the Memphis Grizzlies, in the West, and Orlando Magic, in the East, hold the current eighth seed. In addition, there will be a play-in tournament for that eighth seed. Also, a big reason the league added teams is to boost their revenue.

Sources: Joining the 16 current playoff teams in Orlando: New Orleans, Portland, Phoenix, Sacramento and San Antonio in the West and Washington in the East. If the 9th seed is more than 4 games behind the 8th, No. 8 makes playoffs; Fewer than 4 games, a play-in tournament.

The league wouldn’t return to play if it wasn’t safe. After months of waiting and coming up with a plan, players are eager to get back. Virus issues aside, the NBA last played games in March, and players may be out of game shape. Still, there’s a mental tough Wojnarowski talks about in order to win a championship.

One of the big issues that still need to be addressed is league-wide testing for coronavirus and precautions that are being taken. Those aren’t explicitly outlined yet but will be brought up among the NBA Board of Governors.

Teams are expected to return to their own training camps by the start of July. Now, there’s a growing sense of optimism the league will return to action.

So the NBA's inviting 22 teams to Orlando: 13 Western Conference, 9 Eastern Conference. Eight-regular season games per team. Play-in for the 8th seeds. July 31-October 12. Vote tomorrow to ratify.
The NBA's back.