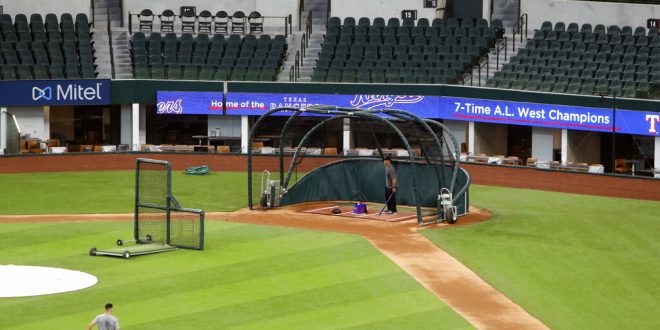 Unidentified players workout at Globe Life Field, home of the Texas Rangers baseball team, in Arlington, Texas, Monday, June 1, 2020. The coronavirus pandemic has forced universities, leagues and franchises to evaluate how they might someday welcome back fans. At baseball games in Taiwan, up to 1,000 spectators have been allowed into the ballpark, but they are barred from bringing in food, concession stands are closed and they are told to sit three seats apart. (AP Photo/LM Otero)

With three of the four major American sports having plans to finish their current season or play the next, the MLB still has many questions to answer.

Where are we now?

Now, we sit at a point where the league is jeopardy of losing its season. The main issue between the two sides is money. More specifically, the revenue split. Right now it’s billionaires, the owners, and millionaires, players arguing over dollars. ESPN MLB Insider Jeff Passan calls both sides being “stubborn.”

The rockiness between both sides started with the league’s first proposal. Since then, proposals have begun to be unrealistic on both sides. Players are unwilling to take more pay cuts but owners don’t want to go deeper into their pockets.

If the two sides can’t come to an agreement, the league could implement a shortened season of around 50 games. This will include a prorated salary that still looms many questions.

Commissioner Manfred has right via March 26 agreement to unilaterally start season of any length — even short, like 40-50 games — and pay prorated salaries. There is no intention for MLB to propose that now however. Hope remains to compromise and play season of meaningful length.

In early March, the league and players agreed on a prorated salary based on how many games were played. That was under the impression that at least 82 games could be played. The league has also gone back and forth to fix the revenue sharing after their initial 50-50 proposal got shut down. Their new idea did little to clear things to play.

Despite all of this, speculation among players and fans is that baseball could return soon. Still, it’s important to remember that some form of Spring Training will need to happen before play begins.

All sound was taken from ABC Newscall