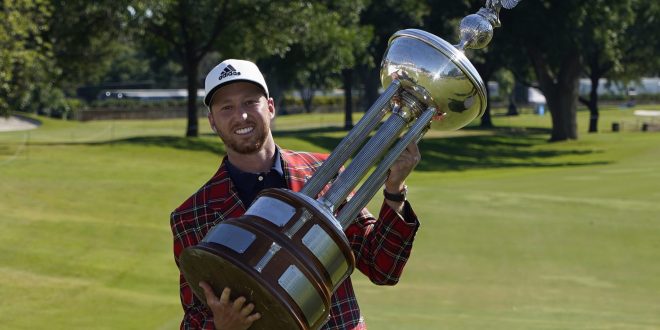 Daniel Berger poses with the championship trophy after winning the Charles Schwab Challenge golf tournament after a playoff round at the Colonial Country Club in Fort Worth, Texas, Sunday, June 14, 2020. (AP Photo/David J. Phillip)

The PGA Tour made its return from the COVID-19 pandemic for the 2020 Charles Schwab Challenge this past weekend at the Colonial Country Club in Fort Worth, Texas. Former FSU golfer Daniel Berger took the tournament to a playoff hole with Collin Morikawa where Berger sealed the deal with a 10-foot birdie putt and crowned himself champion.

“Dream come true! Wins never come easy, you have to fight until the end! Grateful to be the champ of such a great tournament,” said Berger via Twitter.

Berger entered Sunday two shots off the lead. He started the day off strong and snagged three birdies in his first eight holes. Berger hit a bump in the road at the ninth when he hit a green side bunker and suffered a bogey. Yet, he quickly bounced back and even grabbed another birdie on the 14th and 18th which put him at 4-under-par 66 to push to a playoff.

Berger’s confidence did not waver when everything came down to a playoff hole at the par-4 17th with Morikawa. Morikawa missed a six foot birdie putt which made Berger the newest champion of the Charles Schwab Challenge. Yet, there were no cheers to be heard from the crowd.

“It’s obviously a little different not having spectators out there, but there’s still a lot on the line and a lot of pressure. Overall, it was a fantastic event. I think the PGA Tour did a great job. I’m just really happy to be back out here playing golf again,” said Berger.

The coronavirus outbreak had certainly created a unique environment for the golfers. The Colonial event included temperature readings, social distancing, and zero allowance of fans.

“We had tests done when we got on sight. We had temperature readings before we got to the course every day. I felt very comfortable with the whole process that the PGA Tour implemented. I think all of the golfers that were here this week felt the same way,” said Berger.

Before the interruption of golf because of the coronavirus, Berger had been on his A-game throughout the tour. He grabbed a tie for ninth at the Waste Management Phoenix Open, a tie for fifth at the AT&T Pebble Beach Pro-Am, and a tie for fourth at The Honda Classic. The Charles Schwab Challenge featured some of the world’s top-ranked players, yet Berger was able to beat out the best.

“It was maybe the best field I’ve ever played in,” he stated.

Next in the PGA Tour

The RBC Heritage Tournament that was postponed in April will now be held this weekend June 18th through June 21st in Hilton Head Island, SC at Harbour Town Golf Links.

** Sound used in this story courtesy ABC Newscall and ESPN.

Parker Welch is a Junior at the University of Florida majoring in Sports Media at the College of Journalism & Communications.
@parkerrwelch
Previous Update on the NBA season
Next MLB players reject latest proposal by owners