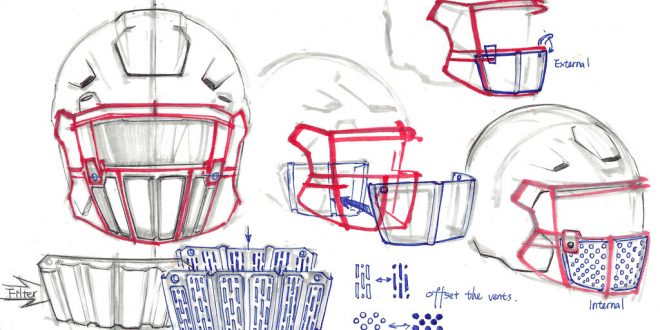 This image provided by Oakley shows sketches of the new face shield designed by Oakley. With NFL training camps set to start at the end of the month, the league believes it is closer to one answer when it comes to player safety in the midst of the coronavirus pandemic. Face shields for the players' helmets. (Oakley via AP)

The start of training camp in the NFL is just two weeks away. However, there are some lingering concerns regarding training camp protocols that would protect players from COVID-19.

In an effort to help the league reopen smoothly, the NFL and its players association will call again today after failing to make progress in their call on Monday. There is a clear sense of urgency in the NFL.

The plan is for teams return to training camp on July 28. Usually, there is a lot of hype and conversation around teams gearing up for camp. However, ESPN’s Adam Schefter is yet to hear that. He thinks that there are some roadblocks in the way.

“There are still a lot of financial issues that need to be addressed,” Schefter said.

Due to the COVID-19 pandemic, one large unknown for the NFL is how the league will account for the loss of revenue. Player salaries and team salary caps could suffer. There are also questions as to whether players can opt out of the season. Because of the many problems remaining, Schefter is doubtful that training camp will proceed as planned.

“I don’t see it happening,” Schefter said. “I think that they’ve got too much work to get done and through, and there are too many uncertainties and too many major issues to think that everything’s just gonna go off without a hitch.”

One safety protocol that the NFL wants to implement is the Oakley Mouth Shield. The design intends to diminish the possible spread of the coronavirus on the field of play.

However, players such as J.J. Watt have pushed back against the face shield, citing concerns over visibility and breathability. They believe that it could hinder their playing ability.

On the other hand, Oakley is not the only company that produces face shields. Players can choose to wear face shields from other manufacturers. Either way, there is a chance that all players will be rocking mouth shields this season.

July 15 is the deadline for tagged players to sign long-term deals with their teams this season. There are 15 such players. Kenyan Drake has the lone transition tag.

However, Schefter does not expect a deal to get done for the majority of these players. For example, a source told Schefter that the Tennessee Titans and running back Derrick Henry are unlikely to reach a long-term deal. In fact, Schefter believes that only one player has a real chance to receive a contract extension.

As it turns out, one player has signed a new contract extension with his team. The Kansas City Chiefs just inked defensive tackle Chris Jones to a four year, $85 million deal.

Regardless of the Jones signing, there will be an alarming number of players stuck under a franchise tag. There is a definitive answer to the lack of deals happening.

“There’s not financial clarity,” Schefter said. “We have no idea how the NFL’s gonna handle there being a flat or down cap in 2021 due to the lack of attendance and the revenue that’s generated there due to the pandemic.”

Football is back.  After a great season-opening game Thursday night, the first football Sunday certainly …