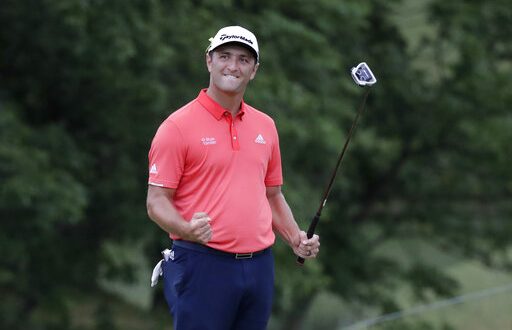 Rahm was able to chip in for birdie on hole 16. However, the review of the shot showed the ball moving slightly. The rules officials assigned a two-stroke penalty to the shot, and Rahm’s 2 on the par 3 turned into a 4.

He was interviewed right after his round, and the question about whether his ball moved seemed to surprise him.

Jon Rahm was assessed a two-stroke penalty for a violation of Rule 9.4 after a ball at rest moved.

His score on the par-3 16th has been adjusted from a 2 to a 4. pic.twitter.com/HWbIN2woTr

After the tournament, Rahm commented on whether he knew the ball moved.

He also said that his shot on 16 is now bittersweet because it was one of the best shots of his career, but it now has the stain of a two-shot penalty.

Even with the two penalty strokes, Rahm was able to win the tournament.

With the win on Sunday, Rahm moves to number one in the Official World Golf Rankings. Previously, Rory Mcllroy was number one. Also, Sunday’s win was his fourth career PGA Tour victory.

It will be the WGC-FedEx St. Jude Invitational in Memphis on July 30-Aug. 2. Also, July 30-Aug. 2 is the Barracuda Championship in Reno, Nevada.

Finally, the first major of the year will be the PGA Championship in TPC Harding Park in San Francisco. The tournament will be held Aug. 6-9.