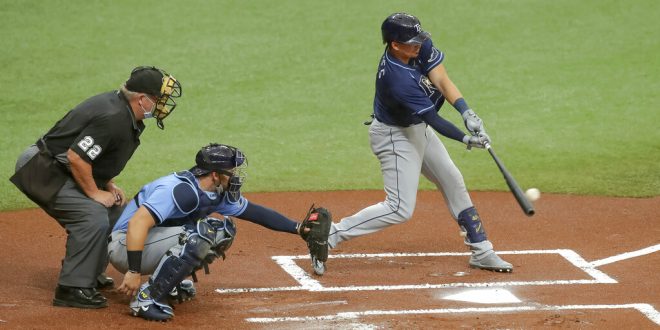 The Tampa Bay Rays are Ready

Last time we saw the Tampa Bay Rays in action, they went down in the ALDS in five games to the Houston Astros. Many gave the Rays credit for forcing a Game 5. This year for the Rays, that won’t cut it. It’s been 12 years now since their trip to the Fall Classic. Their mission: go back and finish what they started.

There’s an argument to be made that the time off helped them. Long-time voice of the Rays Dewayne Staats said he thinks the Rays have a lot going for them.

Last year, the Rays finished second in the AL East with a record of 96-66, clinching the second AL wild card.

Sports Illustrated liked the Rays in its MLB season preview. Two writers, including Tom Verducci, have the Rays winning the AL East and the World Series. A third writer has them at least getting there.

ESPN’s Buster Olney declared his World Series favorite was the Rays. Joel Sherman of the New York Post put the Rays at the top of the AL East.

The safe picks are still the Yankees, Astros (still) and the Dodgers. However, the Rays have the pieces to make a run.

The starting rotation is led by veteran and 2019 Cy Young Award finalist Charlie Morton. In his first season with the club, Morton became the Rays’ most reliable starter. He finished the regular season 16-6 with a 3.05 ERA and 240 strikeouts in 194 2/3 innings pitched. In the postseason, Morton picked up a win in the AL Wild Card Game and in Game 3 of the ALDS.

The 2018 Cy Young Award winner Blake Snell is expected to bounce back from a rocky 2019. He missed the bulk of the second half of the season due to elbow surgery but returns to the Rays healthy in 2020. Tyler Glasnow looked like he would compete for the Cy Young in 2019–until he went down and miss almost the whole season. In 12 starts, Glasnow went 6-1 with a 1.78 ERA, had 76 strikeouts and a 0.89 WHIP. Other starters such as Ryan Yarbrough and Yonny Chirinos were reliable for the Rays last season and will be members of the rotation in 2020.

Staats believes a key to success is the pitching playing to its potential.

Then there’s the bullpen. Would you believe they pitched more innings than the starters in 2019? This may not be the case with the use of the opener becoming less frequent (Yarbrough and Chirinos have graduated from bulk guys to starters). However, managing workloads early in the season might make this the case anyway.

While the Rays strongest asset is the rotation, being able to play match ups with relievers is vital to the success of the team. The top reliever to look out for is Nick Anderson. With the departure of de facto closer Emilio Pagan, Anderson will likely close out the most games for the Rays in 2020. In 21 1/3 innings pitched, Anderson allowed five earned runs and struck out 41 batters.

The biggest question mark is the lineup. Can it contribute enough? There are no expectations to outslug the Yankees or even the Red Sox and Blue Jays. A healthy lineup is capable of getting the job done. But that’s the keyword: health. While the pitching staff has the depth to compensate for an injury, the lineup isn’t as lucky.

Two of the Rays all-stars, Austin Meadows and Brandon Lowe, missed significant time during the summer months and it showed. Sure, it’s only 60 games this year, but the Rays didn’t have a healthy 60-game stretch last season at any point.

While there are solid contributors like Ji-Man Choi and Willy Adames, they are only two of the nine spots in the lineup. While Kevin Kiermaier and Mike Zunino are very strong in the field (for Kiermaier, that’s an understatement), they might not contribute much offensively. Maybe Wander Franco is called up, but don’t expect it.

Having those key guys healthy and in the lineup is crucial if the Tampa Bay Rays want to win the World Series in 2020.

But the pieces are undeniably there to do it.

Harrison is a sports coordinator at ESPN 98.1 FM/850 AM WRUF. He served as a beat writer for Florida Gators football for the 2019 and 2020 seasons. He also contributes to WRUF's Gainesville Sports Center segments and makes appearances on the Clash on Harp on Sports. Harrison has been a content writer for WRUF since January 2019 as well.
@HarrisonSmaj
Previous MLB Preview: What to Expect
Next MLB Opening Day Finally Here