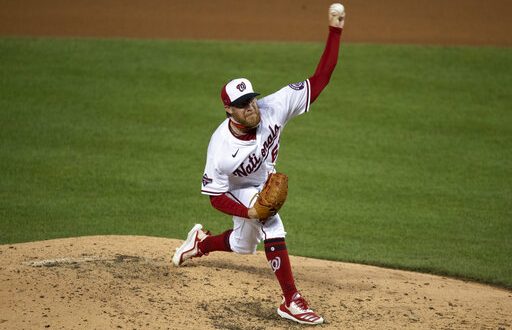 Washington Nationals relief pitcher Sean Doolittle throws during the seventh inning of an exhibition baseball game against the Baltimore Orioles at Nationals Park, Tuesday, July 21, 2020, in Washington. The game was halted due to weather in the eighth inning, with the Nationals leading 6-4. (AP Photo/Alex Brandon)

MLB Preview: What to Expect

This restart is facing a lot of new changes to their usual set-up as they adjust to the coronavirus health guidelines.

One of these changes is the number of games on the schedule. Each team will play 60 games instead of the usual 162. This drastic reduction in games makes each game matter.

Other changes include modifications to the roster. Every team will play the 60 games with an expanded roster to begin the season. Both leagues will use a designated hitter throughout the season.

This new format has the potential of increasing a team’s chances at reaching the postseason. This format demands strong pitching throughout. Each game is crucial, so run prevention is even more important.

A team that benefits from the new format is the Tampa Bay Rays, who have a very deep pitching staff. The Rays had a good run in the 2019 season, finishing second in the AL East and clinched the second AL wild card.

Teixeira believes if the Rays are able to start strong and keep the momentum, they will have a very successful season.

Players’ decisions on kneeling during the anthem

Many athletes got involved in this movement as they voiced their opinions on the matter. During this movement, a previous incident involving ex-NFL quarterback Colin Kaepernick a few years ago was brought back to light.

During the national anthem before a game, Kaepernick kneeled to protest police brutality. He received a lot of backlash for it, and it even cost him his position with the 49ers.

Now, many athletes have considered taking the same action before games. Some of these athletes are still trying to decide whether or not they should do it, while others have voiced their support for this action.

“It meant a lot,” Davis said. “I talked to Crawford before the game and he kind of told me how he felt and that he was behind me and told me what he was going to do. I told him thank you. Having him behind me was big too.”

Camila is a senior at the University of Florida, who served as a beat writer for the women's basketball team from 2019 until the 2021 season. She was also a beat writer for the Gators football team during the 2020 season. Camila is also WUFT's news director as well as a sports reporter/anchor.
@CamilaMaffuz
Previous No Decision on SEC Football Yet
Next The Tampa Bay Rays are Ready