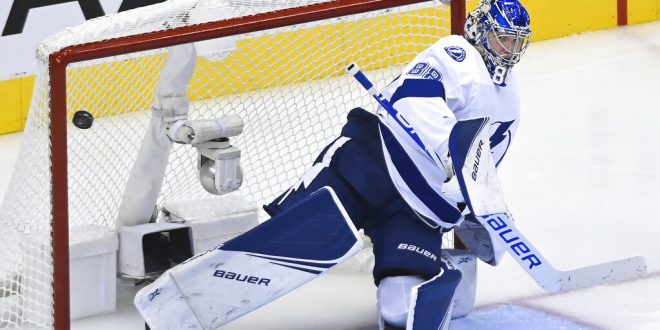 Tampa Bay Lightning goaltender Andrei Vasilevskiy (88) makes a save against the Florida Panthers during the third period of an exhibition NHL hockey game ahead of the Stanley Cup playoffs in Toronto on Wednesday, July 29, 2020. (Nathan Denette/The Canadian Press via AP)

Hockey is underway, and the Tampa Bay Lightning make their return this afternoon against the Washington Capitals. The Bolts already qualified for the playoffs. In their path to the Stanley Cup, they are playing in the Round Robin to decide seeding for the top teams.

The Lightning have had success against their Round Robin opponents–with one exception.

During the regular season, Tampa Bay struggled against Washington, going 0-2-1. In all three games, the Lightning would collapse in the third period. In the first game, the Bolts led 3-1 and lost 4-3 in overtime. This would the one point they got against Washington all year.

In the second matchup, the game was tied 1-1 before the Caps outscored the Bolts 4-1 in the third period to win 5-2.

There was a glimmer of hope for the Bolts in the third game when Nikita Kucherov tied it 1-1 in the third period. However, goals by Dmitry Orlov and Nic Dowd boosted the Capitals to a 3-1 win.

The Bolts are a Changed Team

The last time the two teams played each other was on Dec. 21. The Tampa Bay Lightning were still struggling at that time. Since then, they’ve found their stride and may serve at a tougher opponent to Washington this time around.

The offense started getting it done.

Kucherov scored double the goals in January and February than he did in November and December. Steven Stamkos scored just seven goals entering December. Since then, he’s scored that many goals or more a month.

However, the late-season tear may not have been possible without goalie Andrei Vasilvevkiy returning to form.

The best way to sum it up is if Vasilevskiy is doing well, the Lightning are doing well. Of the 43 wins the Bolts had in the regular season, Vasy has 35 of them. In those wins, he had a 1.90 GAA and a .938 save percentage. In losses, he had a 4.03 GAA and .873 save percentage. He either looks like Patrick Roy or worse than a Zamboni driver.

If the Bolts want payback, they’re going to have to stay sharp late in the game, and their start goalie needs to be even sharper.

The NHL bubble has already seen some crazy outcomes since the season resumed.

The Chicago Blackhawks upset the Edmonton Oilers on Saturday 6-4. Jonathan Toews and Dominik Kubalik each scored two goals in the winning effort.

The Montreal Canadiens entered the Stanley Cup Qualifiers as the worst team to have made it. However, they upset the Pittsburgh Penguins in game 1 to win 3-2 in overtime. Goalie Carey Price put the Habs on his back, holding the Pens to two goals on 41 shots.

Harrison is a sports coordinator at ESPN 98.1 FM/850 AM WRUF. He served as a beat writer for Florida Gators football for the 2019 and 2020 seasons. He also contributes to WRUF's Gainesville Sports Center segments and makes appearances on the Clash on Harp on Sports. Harrison has been a content writer for WRUF since January 2019 as well.
@HarrisonSmaj
Previous Magic and Heat start off hot in bubble
Next Rookie CJ Henderson talks about Jags training camp