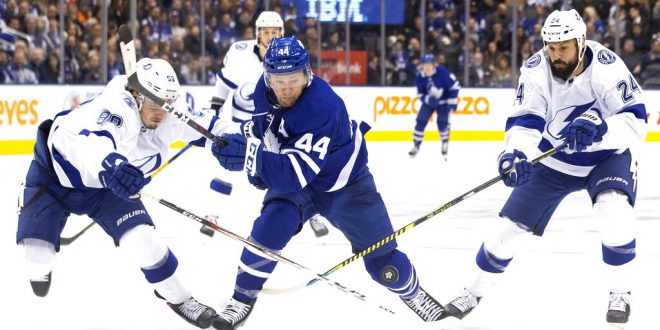 For those itching to see skates hit the ice again, the wait is almost over. The NHL will be back in action starting on Saturday, with 24 teams hoping to raise the Stanley Cup.

One organization that has its eyes set on a run at the Stanley Cup Finals is the Tampa Bay Lightning. After an early first-round exit in 2019, the Lightning are anxious to get back on the ice after a four-month stoppage.

Picking up Where They Left Off

When the NHL paused its season back in March due to COVID-19, the Lightning were second in the Eastern Conference standings behind the first-place leader, the Boston Bruins.

Tampa had a record of 43-21-6 through 7o games with 12 games left on their schedule. Of course, the NHL opted to not play out the remaining regular-season games and instead jump straight into the 24-team play-in and round-robin to determine seeding for the Stanley Cup Playoffs.

As the Lightning get ready to return to play, they will be carried arguably by forward Nikita Kuchervow, who leads the team in goals, assists and points.

Brian Engblom, a color analyst on the Tampa Bay Lightning broadcasts, recently joined Steve Russell on Sportscene. He discussed the Bolts and where they stand heading into the restart.

Engblom said having a solid returning core from the year prior is one of the main reasons the Lightning are favorites to possibly win it all.

Additionally, he also noted last season’s early playoff exit as something the team has used for motivation this year.

After a solid two- to three-month stretch, the Bolts found themselves in a bit of rough stretch when the calendar flipped to March. The Lightning went 3-6-1 in their last 10 games before the season was put on hold. Engblom said injuries along with the team’s almost laid back attitude were reasons for this.

Sleeper Teams that Could Make a Run

While teams like Tampa Bay, Boston and St. Louis are favorites to perhaps win it all. However, Engblom noted a couple of under-the-radar squads that could make some noise, too.

Furthermore, over in the Eastern Conference, Engblom said the Philadelphia Flyers are also a team that could surprise some people, as well.

The Lightning will return to the ice on Aug. 3, when they face the Washington Capitals at 4 p.m. ET in Toronto. The Bolts, along with Boston, Washington and Philadelphia are the Eastern Conference’s top-four teams, which means they are exempt from the play-in and will play a round-robin to determine seeding.