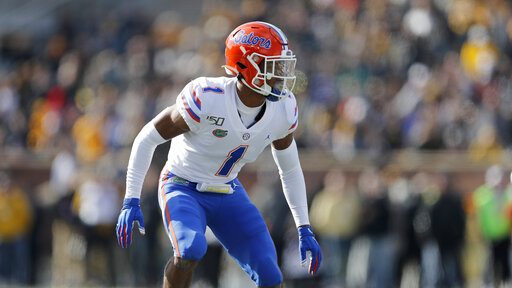 Florida defensive back CJ Henderson takes up his position during the first half of an NCAA college football game against Missouri Saturday, Nov. 16, 2019, in Columbia, Mo. (AP Photo/Jeff Roberson)

Rookie and veteran players alike have had to adapt to a new kind of offseason on the fly. Jaguars rookie CJ Henderson spoke about the challenges this offseason has brought and how his time at Florida will help him.

CJ Henderson on the offseason

Jaguars first-round draft pick, and former Florida Gator, CJ Henderson talked about what he has done through this offseason.

With the No. 9 overall pick in the 2020 #NFLDraft, the @Jaguars select @GatorsFB CB C.J. Henderson!

“It’s been crazy, but we’re learning how to adapt and how to live,” Henderson said.

Henderson joins the Jaguars along with five other cornerbacks in the rookie class. Henderson said it will be helpful to him to have so many other guys going through similar things as him.

“I like to hear guys’ upbringings and how they got here as well. Training with those guys, hearing their perspective on ball and how they play; that helps me as well,” Henderson said.

How the Jaguars rookie compares camp to his Florida days

“The competition I’ve been against day one in the SEC,” Henderson said.” I think that is going to help me tremendously with my confidence and stuff like that.”

Also, Henderson said the transition for Florida to Jacksonville has been pretty smooth because the Jaguars run a defense similar to the Gators.

“Coach Grantham prepared me a lot for this,” Henderson said. I think we have pretty much have the same scheme. It’s just a little bit faster and probably a little bit more plays. They still have the same aggressive mindset and they like to play around the same defense so it’s not too difficult for me to adapt to.”

Fellow rookie and a fellow first-round pick for the Jaguars, K’Lavon Chaisson from LSU, said he’s been a fan of Henderson since his time at Florida.

“He was having a great battle with our top receiver, and there are not too many cornerbacks that can match up with him,” Chaisson said.

Chase had 2 catches on 7 targets, and one 5-yard TD on CJ.. Overall, on the 26 snaps Henderson covered Chase 1 on 1, he did a Great Job. #NFLDraft pic.twitter.com/nSspqbPNos

Chaisson said “It’s a blessing to have him on my team. He makes my job a lot easier, and hopefully, I can make his job easier.”