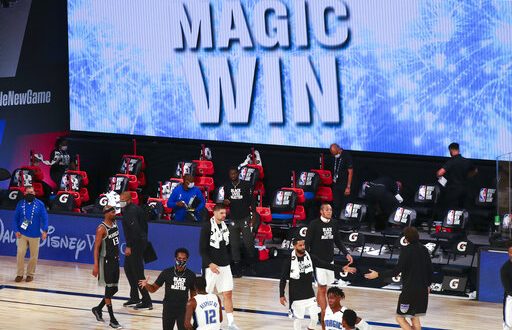 Magic and Heat start off hot in bubble

The NBA restarted in the bubble in Orlando on Thursday, and the two-week push to the playoffs has officially started.

The Magic restarting fast in the bubble

The Orlando Magic were able to continue the winning streak that they had at the shutdown. Dating back to March 8, the Magic have won six straight.

The Magic restarted their season on Friday with a 128-118 win against the Brooklyn Nets. Evan Fournier led the way for Orlando with 24 points on 10/15 shooting.

Then, the Magic followed that win with another on Sunday night of the Sacramento Kings. The Magic got off to a hot start scoring 44 points in the first quarter. The Magic had 78 points by halftime.

Next up: Pacers on Tuesday! pic.twitter.com/1VUQFStrLU

Unfortunately, the Magic learned some time after the game that forward Jonathan Isaac tore his ACL during the win over the Kings. This comes just two games after Isaac returned from a different knee injury.

The Magic are currently the seventh seed in the Eastern Conference.

Looking ahead, the Magic’s next three games will be Indiana on Tuesday, Toronto on Wednesday and Philadelphia on Friday.

The Heat get a win over a good team

The Miami Heat have played one game so far. The Denver Nuggets came into the bubble in Orlando holding the third seed in the Western Conference.

The Heat used a big third quarter to cruise by the Nuggets. Denver actually led Miami by one at the half. However, the Heat outscored the Nuggets by 16 in the third, which broke the game wide open for the Heat.

Also, Bam Adebayo and Jimmy Butler both had 22 points.

Right now, Miami is the fourth seed in the Eastern Conference, and the games ahead for the Heat will be tough.

The Heat will play Toronto on Monday, Boston on Tuesday and Milwaukee on Thursday. All three teams are ahead of them in the East standings.

Other big stories in the NBA

By now, every team in the bubble in Orlando has played at least one game. There have definitely been a few surprises so far.

Also, the Houston Rockets are 2-0. Both wins for the Rockets were nail-bitters. They beat the Mavericks 153-149 in overtime on Friday and beat the Bucks 120-116 on Sunday.

We should have a great week of NBA action coming up.