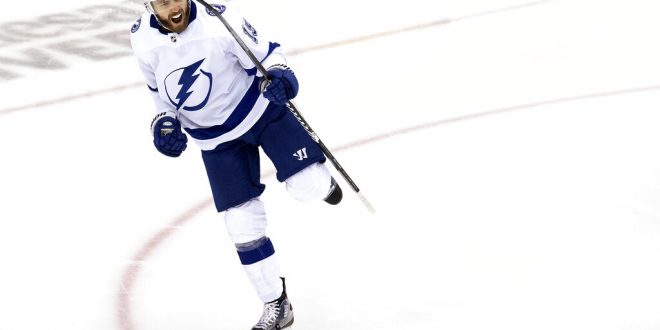 Lightning one win away from knocking out Columbus

Revenge is in the air in Toronto. After Columbus swept them last year, the Lightning are one win away from sending the Blue Jackets home.

Tampa Bay jumped to a 3-1 series lead on Tuesday. They beat Columbus 2-1, while Andrei Vasilevskiy recorded 28 saves for the Bolts.

Barclay Goodrow and Yanni Gourde each scored and assisted a goal in the win. Meanwhile, Cam Atkinson netted a goal for the Blue Jackets and Joonas Korpisalo had 20 saves.

Goodrow scored only 16 seconds into the second period. He popped the puck over Korpisalo’s blocker and it ricocheted into the net.

Less than four minutes later, Gourde stretched the lead to 2-0. He smartly redirected a long shot by Kevin Shattenkirk.

Atkinson scored less than two minutes after that. Despite his quick response, Columbus failed to muster a comeback.

Last season, the Blue Jackets pulled an unpredictable upset. They swept the Lightning out of the Stanley Cup Playoffs in the first round.

So far, that result looks like fuel to the fire for Tampa Bay. According to ESPN’s Barry Melrose, the team knew what it needed to do to avoid another first-round exit.

The Lightning changed the makeup of their team in the offseason. Tampa Bay added Pat Maroon and other players that would help the team become tougher to play against.

As a result, the Lightning are tougher in all aspects. Melrose explained the recipe for the team’s success this season and in this series against the Blue Jackets.

Finally, the Lightning can repay the favor by sending Columbus home in the first round. Game 5 puck drop is tomorrow at noon. Melrose predicts that the Lightning will win the series and that they are a force to be reckoned with.

“They learned their weaknesses last year,” Melrose said. “Now they’re as good a team, if not the best team in the East.”