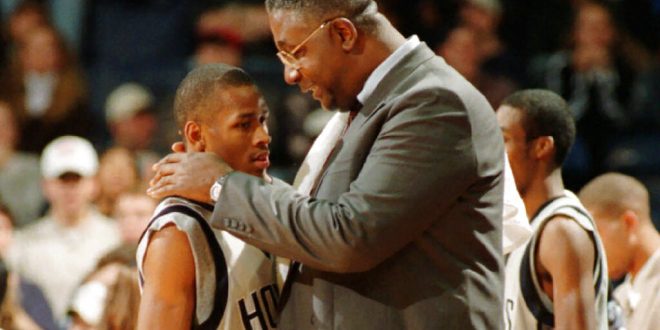 FILE - In this Jan. 24, 1996, file photo, Georgetown head coach John Thompson talks to Allen Iverson during an NCAA college basketball game against St. John's, in Landover, Md. Thompson, the imposing Hall of Famer who turned Georgetown into a basketball powerhouse and became the first Black coach to lead a team to the NCAA men’s title, has died at age 78, his family announced through the university, Monday, Aug. 31, 2020. (Porter Binks/USA Today via AP, File)

Today, we mourn the loss of inspirational leader and legendary coach John R. Thompson Jr. (1941 – 2020), whose contributions on and off the court will forever be felt on our campus and around the world. Because he stood tall, so too have countless others. pic.twitter.com/DhOTbNGVhD

Georgetown hired Thompson as its next head coach in 1972, taking over a team that was 3-27 in its previous season. In his 27 years of coaching the Hoyas, he turned Georgetown into a powerhouse. Thompson compiled a 596-239 record while taking his team to 14 straight NCAA tournaments (1979-1992), 24 consecutive postseason appearances (20 NCAA, 4 NIT), three Final Fours and won six Big East championships. Thompson led his team to three NCAA national championship all anchored by center and current Georgetown coach Patrick Ewing. He lost his first appearance in 1982 against North Carolina and Michael Jordan. In his second time in the big game, he got his championship, beating Houston in 1984.

Thompson was honored by being selected to coach the 1988 United States Olympic team that would go on to earn the bronze medal. Also, among many of his other accolades, 26 of his players were drafted and played in the NBA.

Many of Thompson’s former players spoke on the impact he made in their lives including Allen Iverson and Ewing. Iverson posted on Instagram saying, “Thanks for Saving My Life, Coach.”

Thanks For Saving My Life Coach. I’m going to miss you, but I’m sure that you are looking down on us with a big smile. I would give anything just for one more phone call from you only to hear you say, “Hey MF”, then we would talk about everything except basketball. May you always Rest in Paradise, where there is no pain or suffering. I will always see your face in my mind, hoping that I made you proud. “Your Prodigal Son”. #Hoya4Life

Ewing also posted a tribute to his former coach on Twitter. Ewing said, “He changed the world and helped shape the way we see it.”

Thompson, known for sheltering his players, held closed practices, controlled the media and did not allow freshmen in their first semester to interview (which is still a restriction that still stands today at Georgetown). Dick Vitale says he was not only a father figure to just Ewing and Iverson but all the athletes he coached in his time at Georgetown.

Thompson’s players looked up to him because of the principles he stood for. When the NCAA enacted Proposition 48, a regulation that stipulates minimum high school grades and standardized test scores that student-athletes must meet in order to participate in college competition, Thompson felt the proposition the biased towards underprivileged students. In demonstrating his displease, Thompson walked off the court before the tip-off of a home game against Boston College in 1989.

Syracuse’s Jim Boeheim says Thompson stood against a racist rule and acted all on his own.

John Thompson earned the respect of his players and those around him by the way he carried himself and how he lived his life outside of the game of basketball. 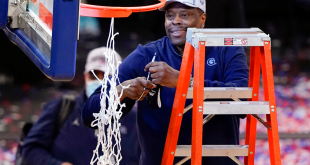 Ewing gets Georgetown back in the NCAA tournament

No. 33 hangs proudly from the rafters in Madison Square Garden. Patrick Ewing, the former …