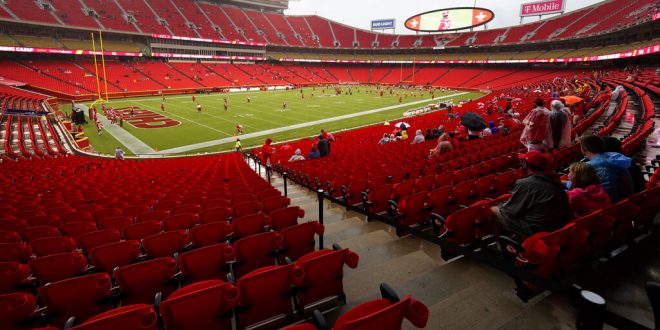 FILE - In this Aug. 29, 2020, file photo, fans watch the Kansas City Chiefs during NFL football training camp, at Arrowhead Stadium in Kansas City, Mo. A football-starved nation is getting its games back with the start of the NFL season, but many worry that attending games or get-togethers will lead to a new surge in coronavirus infections. NFL football will kick off Thursday, Sept. 10, in Kansas City at a stadium that's allowing 17,000 fans inside. (AP Photo/Charlie Riedel, File)

Chiefs plan to continue momentum against the Texans in Season Opener.

After the uncertainty of no football, this season due to COVID -19, the NFL is finally back. The Kansas City Chiefs will kick off the 2020 NFL season opener against the Houston Texans on Thursday night at 8:20 p.m.

The game will be played in Kansas City in Arrowhead stadium with a limited amount of fans at 22% capacity.

The Chiefs and Texans faced off twice last year and both matchups were played in Arrowhead Stadium. In their first matchup in the regular season, the Texans won 31 -24 after Deshaun Watson lead his offense down the field to victory as he ran in for the touchdown to put them up against the Chiefs, and they converted the 2 point conversion.

The Chiefs and Texans met up for the second time in the postseason, where the Chiefs won 51 – 31 after coming back from a 24-0 deficit from the second quarter. In tonight’s game, the Chiefs and Texans plan to limit their mistakes as both teams try to come out with a victory. As this season had no preseason, this will be the first time each team sees action.

The reigning champs look to pick up where they left off last season as they attempt to win another Super Bowl in the 2020 – 2021 season after winning the division with a 12-4 record last season.

Patrick Mahomes and almost all of his offensive are back this season as they plan to keep the offensive rowing. They were 6th in the NFL in total offense with 379.2 yards per game last season.

The Chiefs drafted LSU running back Clyde Edwards-Helarie in the first round who will see his first action tonight. Mahomes will have many weapons to throw to tonight with Travis Kelce, Tyreek Hill, and Sammy Wakins all starting in tonight’s game. The Chiefs should be able to take advantage of a Texans defense who didn’t have the greatest defense last season.

Mahomes spoke about getting off to a fast start:

The Chiefs will have most of their key defensive players returning as they look to build off the momentum of their pass defense which was 5th last season and 8th in the fewest passing yards allowed with 221.4. Their run defense was not the best last year but they look to improve this season.

The Texans look to continue their success of last season as they won the AFC South division with a 10 -6 record.

The rushing offense was a big part of Houston’s success last season as they average 125.6 yards per game which was 9th in the NFL. They look to do the same this season with the addition of David Johnson.

In the offseason, they traded wideout DeAndre Hopkins for Cardinals running back David Johnson.

The Texans will have a couple of new wide receivers for Waston to throw to tonight with the new additions of Brandon Cook and Randall Cobb, who will be paired with the veteran squad of Kenny Stills and Will Fuller.

The Texans will have to limit their mistakes as they go up against a great pass defense in the Chiefs.

The Texans look to improve on their defensive woes. They ranked 25th in pass defense and rush defense last season. There is hope for the defensive as J.J. Watt returns to the team. The Texans will have their hands full tonight in stopping Mahomes and his stacked offensive of Kelce, Hill, Wakins and former LSU rookie running back Edwards-Helarie.