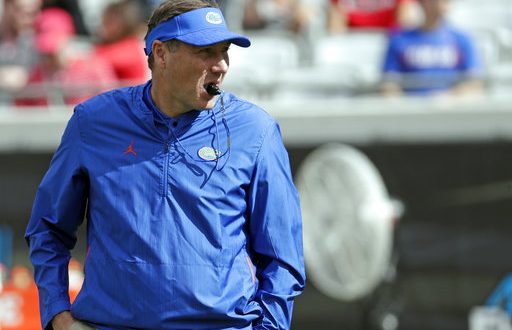 With game week just a week away head coach, Dan Mullen, is putting emphasis in a different area for the Florida Gators.

While the team is excited to be so close to game day, Mullen has noticed mistakes during practice that are completely mental. So, this week in addition to physical toughness and effort, the team is also focusing on dealing with the mental strain.

Mullen said he noticed many of the games over the weekend had critical errors that came from a lack of playing football.

Being able to practice for so long is great, but it does come with its own set of challenges. Mullen believes that some of the athletes have become complacent in practice. However, the team is excited for game week and Mullen thinks this will help his team get into the game flow.

The 2020 season is definitely going to come with some differences and challenges.

The team will face a number of differences when it comes to game day. This will include seating arrangements, locker room locations and hotel roommates.

And when it comes to road games, the players will face a whole other set of challenges. However, the Gators are working with their medical staff to make sure everything is done properly.

When the team’s COVID-19 numbers come out tomorrow, Mullen says there will be a few more numbers than last time. However, he also stated that the team has had a problem with false positives coming back. The false positives will most likely not be shown in the numbers.

All though there has been an increase in numbers, Mullen knows this may not be strictly his player’s faults. 50,000 students attend the University of Florida. With the return, there was bound to be a spike with the increase in the number of people around town.

However, Mullen also knows that the health officials and his players are working together to create one of the safest environments.