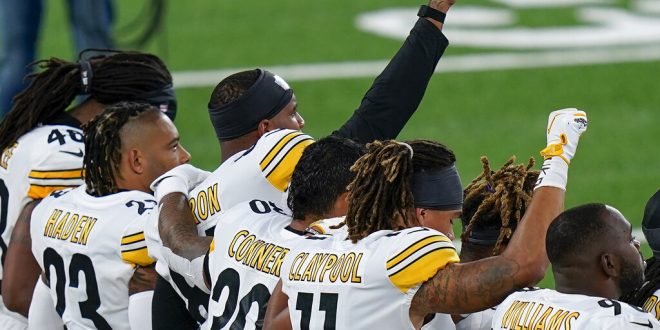 Monday night concluded week one of the NFL. The night featured a close match against the Denver Broncos and the Tennessee Titans, and a message against racial injustice in the Steelers vs Giants match.

The Pittsburgh Steelers kicked things off for 2020’s first Monday night football when they hosted the New York Giants. The Steelers made an impact before the game even started by holding a banner that read “Steelers Against Racism” during the national anthem.

The banner also listed each of the player’s hometowns on both sides.

We stand together against racism. #ItTakesAllOfUs

After this, the game between the American Football Conference (AFC) foes began.

The game started as a close one as neither team scored a touchdown in the first quarter. Both teams were only able to get on the board with a field goal that led to an even score of 3 going into the second quarter.

The Steelers finally connected in the second quarter, as Ben Roethlisberger‘s offense seemed to be more in sync. This led to Pittsburgh outscoring the Giants 13 to 7 in this quarter.

Both teams struggled to get to the end zone during the third quarter as both ended scoreless. The action resumed in the fourth quarter in which the Steelers outscored the Giants once more.

New York’s second-year QB Daniel Jones had a mixed performance during this game. He was seen completing good throws, but his two interceptions really hurt the Giant’s chance of winning.

But Jones’ interceptions were not the only offensive flaw seen by the Giants. New York also struggled in their rushing game with running back Saquon Barkley rushing only for six yards on 15 attempts.

The Penn State alumni mentioned that he is not too worried about the numbers, as his focus is to get better for his team.

“Not really too concerned about the stats,” Barkley said. “Got to give credit where it’s due: They have a great defensive front. I have to be better for the team.”

Barkley was not the only one to acknowledge the Steeler’s defensive front. Roethlisberger also mentioned that his defensive line had his back throughout the game.

The Steelers will return home on September 20th as they host the Denver Broncos. The next challenge for the Giants will also be on the 20th, as they travel to Chicago to face the Bears.

The Broncos wrapped up the NFL’s week one when they hosted the Tennessee Titans. This was a low-scoring game with a final score of 16-14 with the Titans coming on top.

Both teams were scoreless in the third quarter, and the Titans later outscored the Broncos nine to seven in the last frame.

The Titans on the other hand were able to sustain their drives, which slowly but surely got them the win. But their ability to sustain their offense still had its faults as Titans kicker Stephen Gostkowski missed four consecutive field goals, including an extra point kick.

Gostkowski redeemed himself later in the game with a game-winning field goal that secured the Titans’ first win of the season.

Despite his multiple failed attempts, Titan’s head coach Mike Vrabel says that he still had confidence in his kicker. Gostkowski recognized that this was not his best performance, but felt lucky that his team still fought to get the win, and he was able to clinch the win for them.

Up next, the Broncos will travel to Pittsburgh to face the Steelers while the Titans will go back home and host the Jacksonville Jaguars. Both games will be on September 20th.

Camila is a senior at the University of Florida, who served as a beat writer for the women's basketball team from 2019 until the 2021 season. She was also a beat writer for the Gators football team during the 2020 season. Camila is also WUFT's news director as well as a sports reporter/anchor.
@CamilaMaffuz
Previous Mullen Putting Emphasis on Mental Toughness
Next Lightning look to take Eastern Conference in Game 5