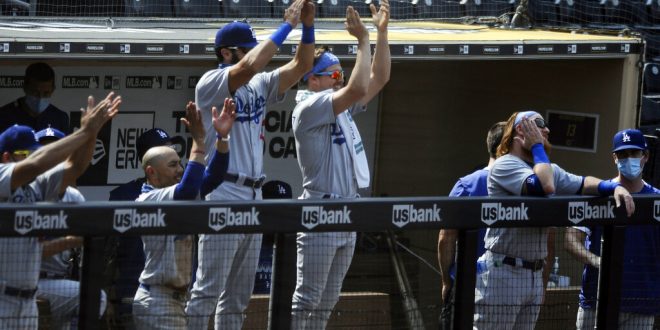 The Los Angeles Dodgers bench claps for Will Smith after he hit a two-run double against the San Diego Padres in the fifth inning of a baseball game Wednesday, Sept. 16, 2020, in San Diego. (AP Photo/Derrick Tuskan)

The Los Angeles Dodgers are the MLB’s first team to clinch a playoff spot after beating the Padres 7-5 in Wednesday’s contest. The Dodgers, with the best record in baseball, are the overwhelming favorites to win the World Series.

The first squad in the postseason?

Los Angeles headed to their eighth consecutive playoff appearance. The third-longest streak in MLB history behind the Braves (14) and the Yankees (13). In those eight seasons, they have been to the World Series twice times.

Unfortunately, the Dodgers have not been able to take home the title, losing to the Astros and Red Sox. They are still looking for their first title since the 1988 season. In 1988, the Dodgers defeated the Athletics in five games. While considered the best team in 2019 they fell short to the current World Series Champions Nationals in the divisional series.

Los Angeles hopes to turn the tide this season. They have completely dominated their competition and hold a 35-15 record giving them the No.1 seed in the NL.

After taking one of the eight playoff spots, the Dodgers’ next goal is to take their eighth consecutive NL West championship and the top seed in the National League. LA is three and a half games ahead of the Padres, who are the second seed in the NL.

The Dodgers took two from San Diego this week with just 10 games remaining in their schedule. It will be difficult to lose for Los Angeles as they play the Rockies (22-26), Athletics (31-19) and the Angels (20-30).

It might look easy but the Dodgers lost the last two games against the Rockies and the Athletics are in position to win the AL West and take a playoff spot.

The magic number is most likely six wins to clinch the division and the No. 1 seed in the league. The top seed will guarantee a home playoff series in the first round before heading to Arlington, Texas.

Give us your picks for NL division winners. pic.twitter.com/iLcXgggjUX

Playoff Picture As of Today

If they season were to end today, the Dodgers would face the Giants in the first round of the playoffs at home. Los Angeles is 6-4 against San Francisco this season and has won two of the three series. They did split the opening series against the Giants.