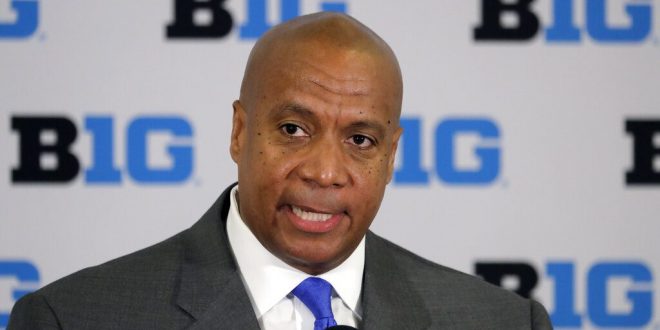 FILE - In this June 4, 2019, file photo, Kevin Warren talks to reporters after being named Big Ten Conference Commissioner during a news conference in Rosemont, Ill. Leaders of six state legislatures in the Big Ten footprint have sent a letter to commissioner Kevin Warren asking the conference to reconsider its decision to cancel the fall football season. The letter is written on the letterhead of Michigan House speaker Lee Chatfield and also signed by statehouse leaders from Iowa, Minnesota, Ohio, Wisconsin and Pennsylvania. (AP Photo/Charles Rex Arbogast, File)

The Big Ten will play football this fall. In a unanimous decision, the conference decided to resume play starting the weekend of Oct. 24.

Controversy surrounded the conference’s previous decision to postpone play because other conferences like the Southeastern Conference, Atlantic Coast Conference and others are playing football this season. The Big Ten’s commissioner, Kevin Warren, said the conference continued to assess the situation after postponement.

Warren also said player health and safety was a top priority for the conference’s leadership. Once, the Big Ten’s presidents and chancellors set standards for returning to play, and felt comfortable moving forward with the season, he said.

The conference is unequivocally in a better position today than it was when it initially made the decision in early August, Warren said.

Additionally, Ohio State quarterback Justin Fields expressed discontent with the conference’s decision to postpone play. Commissioner Warren said that the criticism shows how passionate the Big 10 is about playing football.

ESPN’s Paul Finebaum thinks Fields and Ohio State are one of the main reasons the Big Ten is playing football this fall. He said the school “drove this bus” and led the way in advocating to play.

Finebaum said teams are ready to get going. He also predicts that a Big Ten team will play in the College Football Playoff this season.

With the Big Ten resuming play on the weekend of Oct. 24, the Pac-12 remains the only power-five conference to not participate in football this season. However, the Pac-12 has no plans to resume play, and the earliest it would resume play would be mid-to-late November, according to ESPN.

Steven Walker is a beat writer for ESPN Gainesville and is currently studying Journalism & Sports Media at the University of Florida.
@swalker_7
Previous Dodgers Clinch the Playoffs First
Next Bengals vs Browns in The Battle of OHIO