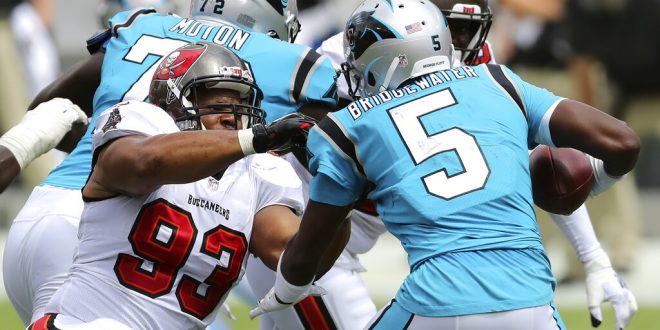 Defensive lineman, Ndamukong Suh, is looking to go after the ring.

Suh has once again signed with the Tampa Bay Buccaneer agreeing to a 1 year $8 million contract in hopes of taking it all the way.

Suh going after the ring

In March, Suh satisfied his free agency by accepting to play again with the Tampa Bay Buccaneers. The once highest-paid defensive lineman, says his eyes are on the ring.

Last Sunday, the Buccaneers captured their first win of the season against the Carolina Panthers. The game resulted in a 31-17 game victory.

In total Suh secured 5 tackles and 2 sacks.  Suh captured one of his sacks late in the first quarter. The last time Suh captured 2 sacks in one game was back in 2015.

Last season Suh rounded up a total of 2.5 sacks. He nearly reached that total in just one afternoon.

Wearing the number 93 on his back yet again, there is no doubt that Suh is hoping to collect that Super Bowl championship.

Suh on the addition of Tom Brady

Last season, the Tampa Bay Buccaneers upheld their title as having one of the best defensive lines in the league. Now, they have a chance to prove this argument offensively.

Suh says having Tom Brady on the offensive line has allowed for a competitive fire.

“It is a great opportunity to learn from somebody who has obviously had a great career and continues to play at a very high level. Lots of things for me to learn.”

As someone who has six Super Bowl championship rings, there is no doubt that Tom Brady also has his eye on another Super Bowl win.

Suh and The Buccaneers will be looking to secure another victory against the Broncos this Sunday.