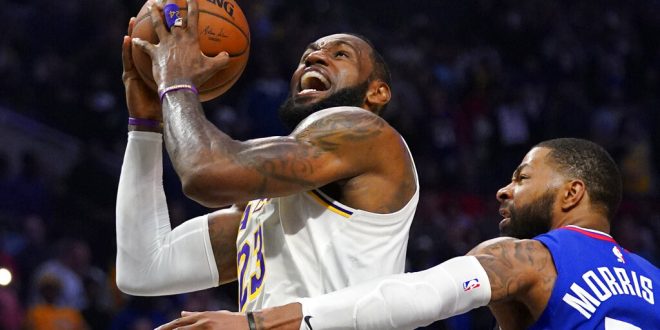 FILE - In this March 8, 2020, file photo, Los Angeles Lakers forward LeBron James, left, shoots as Los Angeles Clippers forward Marcus Morris Sr. defends during the second half of an NBA basketball game in Los Angeles. The NBA is a few weeks from playoff mode, and James has himself and the Lakers squarely in the mix to compete for championship. It is a rare bit of normalcy for a player who appeared in eight consecutive NBA Finals from 2011 through and including 2018, and for a franchise that has won 16 championships. (AP Photo/Mark J. Terrill, File)

The Los Angeles Lakers are one win away from advancing to the NBA Finals. They defeated the Denver Nuggets 114-108 in game 4 on Thursday night.

The Lakers brought in the 27-year-old superstar to pair with LeBron James. Both players are more than capable of taking over a game at any given moment. Thursday was Davis’s turn.

The 6-10 power forward/center accounted for 34 points in the win. It was the third time this series that he eclipsed 30 points.

Davis has done exactly what the Lakers could have hoped for, share the load with James and allow both players to be fresh come playoffs. While Los Angeles is in a great position to advance to the NBA Finals, the Nuggets are a team they can’t let up on.

Murray continues to amaze against the Lakers

Despite the loss, Denver fans have plenty to be excited about. Twenty-three-year-old guard, Jamal Murray has been nothing short of amazing during these playoffs.

On Thursday, he put up 32 points. His numbers are impressive. However, it’s the way he scores that has fans excited. With James in his face, Murray had the shot of the night with a layup that immediately reminded people of Micheal Jordan.

James, who switched over to guard Murray had high praise for him after the game.

Murray and the rest of the Nuggets have proven that they belong here. They have talent.

If Murray continues to play at this level, then the Lakers have plenty to worry about, even with a 3-1 lead.

Davis and James are hoping to end this series on Saturday night and lock in their spot in the NBA Finals. A win would give the Los Angeles their first finals appearance since 2010.

While the Lakers are in a great position, the Nuggets have been here before. In the series against the Clippers, Denver found themselves down 3-1 and came back to win it in game 7.