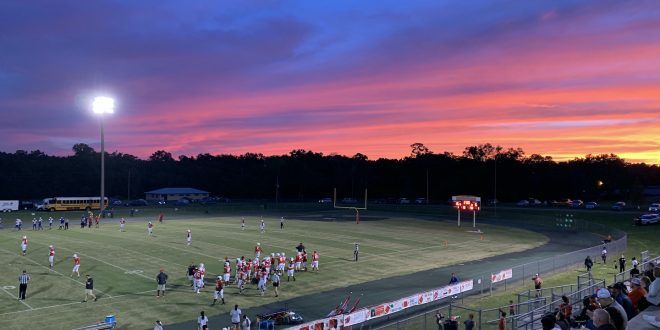 A sunset over the Williston vs. Newberry football game on October 1st, 2020.

4th Quarter Performance Not Enough for the Williston Red Devils

As the sun faded off into the Thursday night sky, the Williston Red Devils prepared to host a non-conference matchup against a fierce Newberry Panthers team.

“Newberry and Williston is one of the premier rivalries in the area, and this is a game we look forward to every single year,” Coach Richard Whittington said.

Despite jumping out to an early lead, the Red Devils gave up four unanswered touchdowns until they made a comeback in the fourth quarter that fell just short as Newberry sealed the 26-24 victory.

A Roller Coaster First Half

On the first drive of the game, senior Rashaud Nelson stunned the Panther’s corners to haul in a long touchdown reception. Fellow senior Tiger Days rushed for the two-point conversion to put Williston up 8-0 early on.

With the Panther’s first opportunity of the game, they fumbled a lateral pass in enemy territory, and junior Ajavien Anderson secured the ball for the Devils. Back to work going the other way, Williston converted a 4th and short with a run up the middle from Sophomore Edariyon ‘Ed’ Wesley. With the drive still alive, senior Marland Williams finished the job with a touchdown to the right. Once again, the two-point conversion was a success as it increased Williston’s lead to 16-0.

The Devils started off hot, and Newberry looked to find a rhythm to change the pace of the game. The Panthers figured out Williston’s defense as they orchestrated a solid drive down the field to score a touchdown. However, they missed the kick, so the scoreboard read 16-6 Devils.

This drive clearly boosted Newberry’s confidence and gave them momentum for a destructive rest of the second quarter. Senior Justen Crews set the Panthers up at the goal line after a long run, and then senior quarterback Makai Johnson punched it in up the middle. Suddenly, Newberry had cut the Devil’s to two, 16-14.

After sophomore Bryan Eastman recovered a fumble, the Panthers took their first lead of the game when senior Lovell Thomas lowered his head for the touchdown run. A failed two-point conversion left the score at 20-16, Newberry.

With just seconds left to go in the half, Johnson reached into his bag of tricks as he heaved a bullet-like pass into the endzone through multiple defenders for a touchdown. At halftime, Newberry was up 26-16.

A Tense Second Half

The third quarter was a stalemate as neither team scored over the 12 minutes of play. Williston had two opportunities after forcing a pair of turnovers, but was unable to capitalize and punted on both trips. One turnover was credited to Nelson who stripped the ball on a play that would have put the Panthers in the red zone. The other was attributed to the Red Devil defense that stopped Newberry on fourth down.

In the final quarter, the Panthers quickly moved the ball to the other side of the field. On 4th and 10 from the Devil’s 36, a pass interference call moved the sticks to the 17 for Newberry. With a new set of downs, the Panthers continued their drive. The Williston defense once again came up large, halting them on another 4th and 10.

With under ten minutes to play, the Devils needed to score fast to have one more opportunity in the game. From Williston’s own 15-yard line, Nelson broke away from his defender for a 22-yard catch. The officials called a personal foul on Newberry when tensions flared up after the play, costing 15 additional yards to the Panther 43. Back to the line of scrimmage, senior Kurt Pitts danced up the middle to the 11 to set up a touchdown run for Wesley. After the two-point try, the Devils brought themselves to within a deuce.

On the Panthers’ next set of plays, they converted a handful of first downs to drain the clock and take a knee. The final score, 26-24 Newberry.

The Panthers’ win elevated their record to 4-1 on the season, while Williston fell to 2-3.

Despite the loss, the night provided hope to a program on the rise. Here is what Coach Whittington had to say after the game:

“Our program grew today, there ain’t no doubt about that. We stepped up, we rose to the occasion, we continued to fight. We always talk about 100% intensity, 100% effort, and 100% focus. We had two of those things tonight, but now we have to get the focus part in the play and that will be the step we need to get to an elite program. We are right there on the pinnacle of being able to compete. We know there are things we need to work on but our program is growing.”

Coach Whittington also showed his appreciation for his players.

“It is really fun watching these young guys grow over the last four weeks. Where we were four weeks ago to where we are now shows we really are becoming a better ball team. But if we continue to grow at the pace that we are growing, it is going to be interesting to see what it is like come playoff time.”

The Williston Red Devils will host their annual homecoming game against the Wildwood Wildcats on Friday, Oct. 9 at 7:30 p.m.