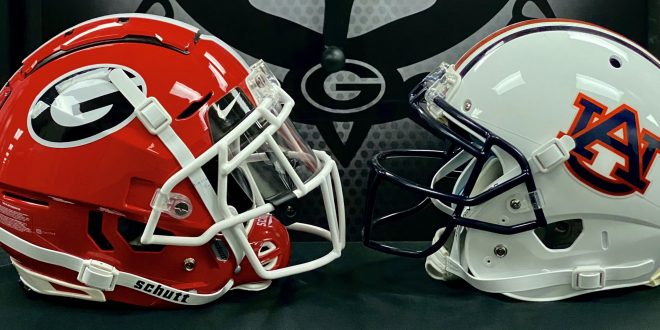 The SEC has some major football matchups this weekend with the following teams go into week two undefeated.

Georgia comes into this matchup as the top contender and ranked fourth in the country. The Bulldogs are coming off a 37-10 win against Arkansas last weekend in the first game of the season.

The Dogs struggled last weekend against Arkansas in the first half of the game, but fought back to silence the Razorbacks in the second half. Georgia’s team is under construction due to COVID-19 after not having a spring practice. This had an impact on their roster. First, their Star quarterback pulls his name from college football but that didn’t stop them from pulling off a win.

The Dogs start their season rotating at the quarterback position this week going up against Auburn. Stetson Bennett is the favorite to start .Georgia’s defense is really what helped stamp their win against the Arkansas.

“Hey Siri – play Baba O’Riley by The Who” pic.twitter.com/0ASZRfNuo5

Auburn comes into this game with one win under their belt, already taking down the Kentucky Wildcats in their first game of the season 29-13.

The light shined on starting quarterback Bo Nix, who helped lead his team to their first win of the season. He completed 16 of 27 throws for 223 yards and three touchdowns. Although he had a great game against Kentucky, going against this Georgia defense will be an interesting   challenge for the sophomore quarterback.

The last time these two team met was last season where The Bulldogs won 21-14 over the Tigers.

The no.2 ranked Alabama teams enters its second week of college football hosting an undefeated Texas A&M team. The Crimson Tide are coming off a 38-19 win in week one win against Missouri.

Alabama looks to make a statement going forward due to being left out of the college football playoff last season. Alabama has dominated Texas A&M, defeating them seven out of eight times they have played against each other. Led by Quarterback Mac Jones who had an impressive game against Missouri going 18-of-24 passing for 249 yards and two touchdowns.

Texas A&M also enters this game ranked no. 13 in the country and has an undefeated record in week one.

They defeated Vanderbilt 17-12. Stepping into this game a bit shaken up on the offensive side from their previous match against Vandy, fumbling five times and having eight penalties throughout the game, the offense is still trying to find themselves.

The Aggies were able to pull that win off due to their quarterback,  Kellen Mond who completed 17-of-28 passes for 189 yards and a touchdown and their running back running back Isaiah Spiller, who recorded 117 rushing yards on eight carries.