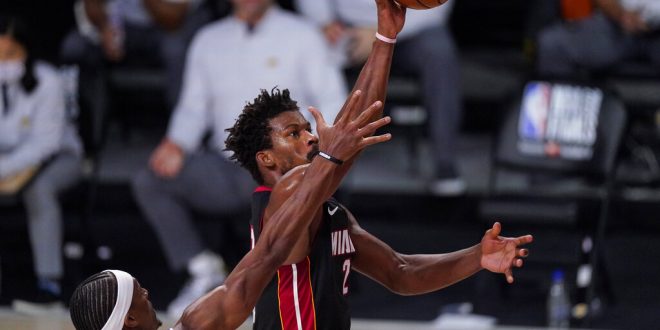 Jimmy Butler’s triple-double was the reason the Miami Heat took Game 3 Sunday night. The Heat beat the Lakers 115-104 to cut the series deficit to 2-1.

The short-handed Heat needed someone to step up to get back into this series, and Jimmy Butler delivered. Butler put up 40 points, 11 rebounds and 13 assists. Also, Butler shot and efficient 14 for 20, and the Heat were +20 when he was on the floor.

Butler talked about how he doesn’t care about his stats as long as the team wins.

Furthermore, Butler talked about how competitive he is with LeBron James.

The Miami Heat shot 51% on Sunday night. It was their best shooting performance of the NBA Finals. Additionally, the Heat shot 35% from beyond the arc.

Furthermore, the Heat dominated in the paint. Miami out scored Los Angles 52-34 in that area as the undersized team.

The Heat forced 19 Laker turnovers, and were able to score 17 point off of them.

Erik Spoelstra on the win

Heat head coach Erik Spoelstra tried to keep things in perspective Sunday night. He said this was just one win, and they still understand they have a long road ahead of them.

He continued by saying they have great respect for the Lakers, and they understand they will have to play their absolute best to win this series.

Finally, Spoelstra tried his best to describe what Jimmy Butler does for this Heat team.

The Lakers played their worst game of the series Sunday night. Anthony Davis wasn’t his usual dominant self. He only put 15 points on 9 shots.

Lebron James put up 25 points, 10 rebounds and 8 assists but it wasn’t enough to overcome the Heat and Jimmy Butler.

The Lakers will need to get Anthony Davis more involved if they want to win Game 4.

Game 4 in this series will be Tuesday night at 9. Miami is hoping Bam Adebayo will be back after being out the last two games with a neck injury.