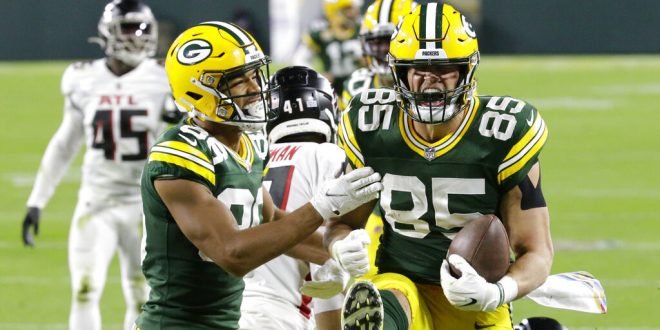 The Green Bay Packers earned a 30-16 victory over the Atlanta Falcons. This match featured an excelling performance from quarterback Aaron Rodgers.

Both team rosters were hurt as many starters were out due to injuries. The Packers offense was without starting receivers Davante Adams and Allen Lazard. The Falcons were left without wide receiver Julio Jones who left the game in the first half.

Although both teams were dealing with injuries, only one of them showed their ability to adapt.

Rodgers and the Packer seemed to have zero problems when it came to adapting during injuries. The Aaron Jones, Jamaal Williams and Robert Tonyan trio stepped up to assist Rodgers’ almost flawless performance to win the game.

This was also a big night for Tonyan. Not only did he shine in the trio, but he also shined as an individual. The third-year tight end was somewhat on the shadows of Green Bay’s offense. Before this season, he had only two career touchdown catches and 14 total receptions.

Tonyan caught three touchdown passes and had six catches for 98 yards in the Monday night matchup.

His biggest play of the night was during the third quarter. Tonyan caught his third touchdown of the night during this frame. It all happened after running his route, getting tackled and getting right back up to finish the play.

This victory gave Green Bay its first 4-0 start since 2015. It also helped head coach Matt LaFleur earn a 17-3 record, the second-most wins by an NFL coach through 20 games.

Another milestone for this team is that they have scored at least 30 points in the first four games of the season, setting a franchise record. The Packers are having a successful season so far, and Rodgers seems to be proud of his teammates’ hard work and contribution.

The Falcons entered the filed without Keanu Neal and Ricardo Allen, along with cornerbacks A.J. Terrell and Darqueze Dennard. Later that night they lost defensive back Damontae Kazee during the game.

Not being able to adapt to injuries was not the Falcons’ only problem. Dan Quinn‘s defensive front seemed to be out of energy at times. They were also seen out of position various times.

Their offense was not doing any better. They were only able to convert three of their 12 third downs. The O-line also struggled to protect its quarterback as they allowed four sacks in the game.

Quarterback Matt Ryan was also struggling on the field. He struggled to connect to his wideouts, as he failed to complete any of his five attempts to Calvin Ridley.

The Green Bay Packers will travel to Florida to face the Tampa Bay Buccaneers. Kickoff on Sunday is set for 4:25 pm.

The Falcons will return home on Sunday to host the Carolina Panthers. Kickoff from the Mercedes-Benz Stadium is 1 pm.

Camila is a senior at the University of Florida, who served as a beat writer for the women's basketball team from 2019 until the 2021 season. She was also a beat writer for the Gators football team during the 2020 season. Camila is also WUFT's news director as well as a sports reporter/anchor.
@CamilaMaffuz
Previous Hurricanes Volleyball Sweeps the Bulldogs in a Thrilling Match
Next Stanton and Yankees top Rays in Game One of ALDS